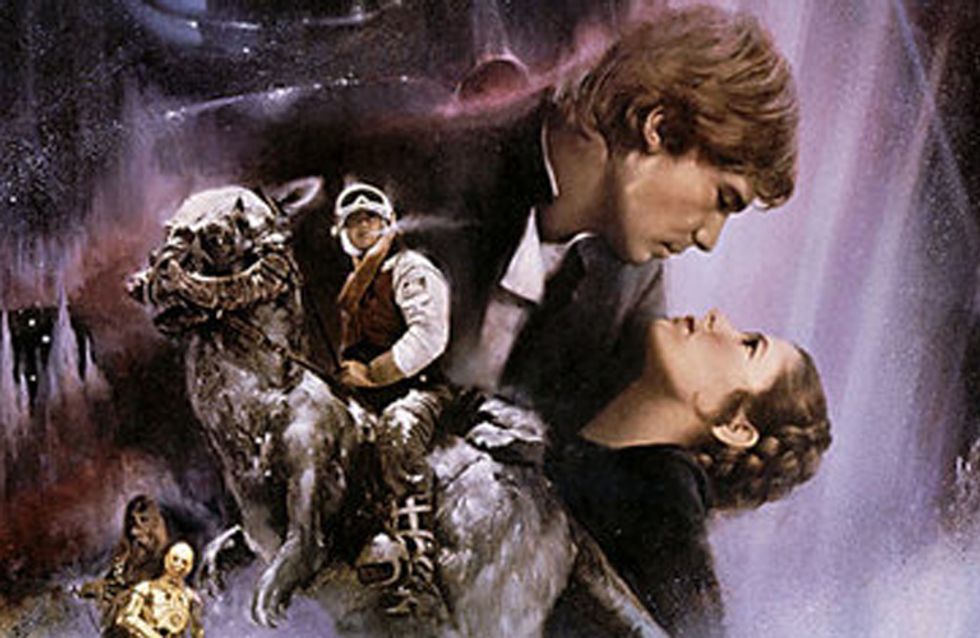 Even if you hate sci-fi and everything Star Wars stands for, chances are you're going to be dragged to the cinema to watch and enjoy every second of the new film The Force Awakens by your family, your friends, your dog etc. For those who just don't get the fuss, and seriously can't BEAR the idea of catching up on one, let alone all SIX movies before seeing the new one, this is for you...

Okay. This is going to be a somewhat brief and utterly compelling recap of the past six films (oh yes, prequels included), so that you can actually hold your own when faced with Episode VII: The Force Awakens. Good luck and may the Force be with you.*

*THIS IS WHAT THEY SAY IN THE FILMS.

This is Anakin Skywalker.

He is an incredibly good fighter and pilot but really hates grains of sand. When he is a little slave boy in the middle of nowhere (a planet called Tattooine), he is found completely by chance and taken to train as a Jedi Knight by Qui Gon Jinn (Liam Neeson, nom) and his Padawan learner, Obi Wan Kenobi (Ewan McGregor, double nom).

Sidenote: Jedi Knights are basically kick ass guardians of the galaxy who believe in controlling your emotions to use The Force (an energy field created by all living thing) to their advantage (AKA they can jump really high, have premonitions, move objects etc). They also use lightsabers which are basically laser swords as their weapon of choice. A Jedi Knight who turns to the Dark side is called a Sith.

After Qui Gon dies in a lightsaber duel, Obi Wan assumes Anakin's training and eventually the two become total bros fighting as Jedi Knights together, with the only slight hiccup being that Anakin falls deeply in love and marries Padme, a Queen turned Senator who then falls pregnant with his twins.

​Anakin constantly dreams that Padme will die in childbirth and in fear turns to the Sith, quickly becoming corrupted by the Dark side. He end up doing many-a terrible thing, including killing A LOT of little kids who really can't act.

Going more or less completely insane, Anakin grows paranoid that Padme has joined Obi Wan to kill him and chokes her before having a bad ass fight with Obi Wan which he loses. Obi Wan cuts off most of his limbs and he is badly burned.

His Sith mentor, Darth Sidious, finds him before he dies and encases him in a black suit to save his life, thus he becomes...

In the meantime, Padme dies soon after giving birth to twins Luke and Leia. While Leia is adopted by a Royal family, Luke is taken to live with his only surviving relatives on Tattooine, and thus concludes the prequels!

Now to the films people actually like. Luke and Princess Leia are all grown up.

Leia is rebelling against the Empire ruled by Darth Sidious and Vader while Luke lives on a farm and is a whiney little bitch. Before she is captured by the Empire, Leia manages to send a message requesting aid to Obi Wan Kenobi in a droid who ends up in Luke's care along with his neurotic friend on Tattooine.

Their names are R2D2 and C3PO. They are basically present making quips about everything for the entire three movies.

Luke finds Princess Leia's message and realises she probably means the old hermit by the name of Kenobi who lives near to his place.

Finding him, Obi Wan reveals his true identity as a Jedi Knight and tells Luke (most of) the truth about his parentage and that he is destined to be a Jedi. Determined to save the Princess and become a Jedi, Luke leaves with Obi Wan.

Since the pair need a ship, they pay the cheeky scallywag Han Solo (Harrison Ford, the ultimate nom) and his first mate, Chewbacca, to fly them in his ship the Millennium Falcon.

​Han ends up getting totally involved in the adventure against his better judgement and he and Leia fall madly in love (despite seriously creepy vibes between Luke and Leia who don't yet realise they are twins).

After training with Yoda, the oldest and wisest Jedi left (ya know, the little green one), Luke goes to rescue Leia and Han from a particularly bothersome situation only to realise it is a trap and must fight Darth Vader. He finally finds out Darth Vader is actually his father, leading to probably the most quoted moment in the movie franchise...

He is then determined to make his father remember the man he was and come back to the light, which he totally does and ends up killing Darth Sidious before dying. The rebels take down the Empire, and everyone dances and celebrates with these little teddy bear creatures called Ewoks.

Now you're all caught up on the plot, time to watch the trailer for Episode VII again. It's going to be good, we promise!

Are you looking forward to The Force Awakens? Tweet us @sofeminineUK!