We were already incredibly excited at the prospect of Doctor Who’s 50th Anniversary. We knew it would be a love letter to the long-running sci-fi show, and it only became more apparent how good it was going to be when it was announced that Billie Piper and David Tennant were returning AND that John Hurt had also joined the cast. So what more can we expect? Well the new shocking images released by the BBC give us a hint!

We thought that we had all the surprises we were going to get after the mini episode The Night of the Doctor premiered last week, which shocked Whovians everywhere by starring Paul McGraw A.K.A the Eighth Doctor and the story how he regenerated.

But the BBC have now released even MORE images, so let's see what we can derive from them!

From the trailer it's evident that everyone’s favourite Doctors Matt Smith and David Tennant will be working together in some capacity, but according to these images it doesn’t look like they will be getting along particularly, as they appear to be clearly arguing in a couple of scenes and showing their competitive streak (of course they’re both competitive, they’re the same person!).

Then there are the characters' stills. Matt Smith is in all of his tawdry quirks – the exception being his flipping Fez – David Tennant is looking absolutely classic in his trademark brown suit and converse, whilst John Hurt is clad in a sort of steampunk leathery get up.

WATCH: New Doctor Who 50th Anniversary trailer and clip debut
As Rose creepily says in the brand new Doctor Who trailer - the moment is coming. Doctor Who’s eagerly anticipated 50th Anniversary episode is due to air on the 23rd November (A.K.A the end of next week), and the BBC have started giving its fans the first real look into what the episode has in store. Would anyone like to join us in a high-pitched squeal of excitement and shameless trailer analysis?

And check out the girls! The episode will of course star Clara (Jenna Coleman) as the Doctor’s current companion, and Queen Elizabeth I (Joanna Page) who seems to be running around in a forest a lot, but much more exciting is the new, raggedy looking Rose Tyler (Billie Piper).

As Rose was introduced in 2005 as a bit of a chav who knew nothing about time and relative dimensions in space, it's raising questions everywhere with just what her role is – especially as she seems to be hanging out a lot with the John Hurt Doctor.

Then there's the first proper look at the monsters that are called Zygons in all of their scaled hideousness, and there seems to be a couple of shots showing Matt Smith dangling out of his TARDIS.

We seriously cannot wait for the episode to air on BBC1 on Saturday! What about you? Tweet us @Sofeminineuk! 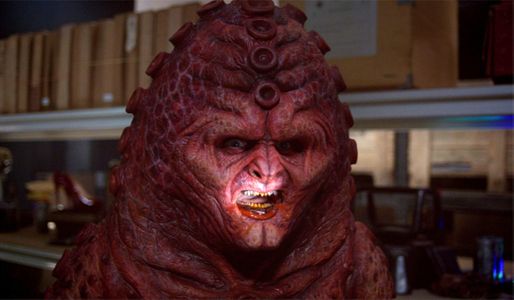 Emmy Griffiths
…
Doctor Who
From hair ideas to outifts, look no further for your daily inspiration