10 Of The Weirdest Celebrities You Had No Idea Were Twins

There's something so exciting about finding out that an actor or singer has a doppelganger! Although some have made their name with their twinnie, other's prefer to leave the spotlight to their sibling. For instance, did you know that supermodel Gisele Bundchen had a twin? Or Vin Diesel? This is important stuff people.

Cheeky chappy Olly Murs has a twin brother Ben, but the two are no longer close after the singer dropped out of being best man at his wedding because it clashed with his appearance in The X Factor semi-finals. Wow Olly. That is majorly not okay! Ben sold his story to a Sunday paper and now no longer speaks to Olly and the rest of their family. Because it was his big day, okay Olly? NOT EVERYTHING IS ABOUT YOU OLLY.

Olly has said how much he'd like to reconnect with Ben, saying: "He's my brother no matter what happens you always have a love for family. I'm hoping we'll sort it out at some point." Aw, poor twins - kiss and make up already!

Scarlett Johansson has a twin brother called Hunter, who appeared with her in the film Manny & Lo when they were both 12 years old and she occasionally takes him along to film premieres as her date as the pair of them are total BFFs!

Although they both began as actors, Hunter ended up entering politics and now works for US President Barack Obama while Scarlett is killing it as the token girl in The Avengers.

Made In Chelsea star Rosie Fortescue has a twin Lily, but her sister seems to have no aspiration to become a reality TV star. She doesn't mind heading off to the events though! The pair party quite a bit together, and when they're not partying, their sunbathing.

Jennifer Lopez and Marc Anthony were over-the-moon to have twins - daughter Emme Maribel and son Maximilian David - in February 2008. Adorable. Following the announcement of J Lo’s pregnancy, the singer's father revealed that twins run in his family, saying: "My sister also had twins, so it's a hereditary thing".

Xtra Factor presenter Caroline Flack has a twin sister called Jody and although Caroline has an incredible life, she has mentioned how jealous she is of her sister's settled lifestyle. She told Fabulous magazine: "One day I’d love to settle down with someone. I’d like my twin sister Jo’s life. She’s got a lovely partner, a gorgeous house and two kids. That’s definitely the next step for me."

Vin Diesel has a sister called Samantha, a brother called Timothy and a fraternal twin brother, Paul, who is a film editor. We need to see this pair step out together so we can compare!

Kiefer Sutherland is part of a Hollywood dynasty – he’s the son of Donald Sutherland and Shirley Douglas, both of whom are successful Canadian actors.

Even his twin sister Rachel is involved in films, but she works behind the scenes in Hollywood as a post-production supervisor. For a bonus, look how cute they were a little kids being swung around by Donald!

Ashton Kutcher has a twin brother called Michael, who lives where they grew up in Iowa. Michael was diagnosed with cerebral palsy at a young age and had a heart transplant at 13. The pair are incredibly close with Michael revealing to People magazine: "Ashton never left my side. He showed me the love one brother has for another."

Gisele Bundchen has a twin sister, but although she’s just as gorgeous as her supermodel sister, Patricia chose not to have a career in front of the camera. They come from a big family and grew up with four older sisters, Raquel, Graziela, Gabriela and Rafaela.

Yup, Xander from Buffy has a twinny! Kelly is the older bro by three minutes, and the pair once appeared together in Nicholas's hit show after his character is 'split in two', with Kelly also playing Xander. You literally cannot tell the difference between them!

Here are the other famous twins you may or may not have known about! 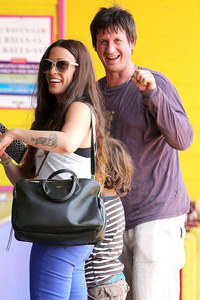