After months of speculation, the stars taking on the roles of Anastasia Steele and Christian Grey in the film adaption of Fifty Shades Of Grey have finally been revealed. We can't wait to see Dakota Johnson and Charlie Hunnam in action - but is the book's author E L James really happy with the decision?

The castings for the lead roles in the Fifty Shades Of Grey movie have finally been revealed.

Author E L James announced the actress and actor who will play Anastasia Steele and Christian Grey in the film adaption of her racy bestselling book via Twitter yesterday.

She tweeted: "Good moaning all. Hold on to your hats...

"I am delighted to let you know that the lovely Dakota Johnson has agreed to be our Anastasia in the film adaptation of Fifty Shades of Grey."

"The gorgeous and talented Charlie Hunnam will be Christian Grey in the film adaptation of Fifty Shades of Grey."

The author later added: "To all the supporters, lovers and haters - thank you so much for the passion that you have for this project. You all rock. All of you." 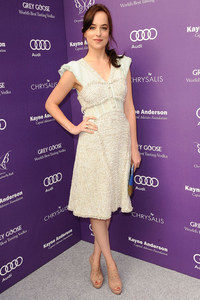 Fifty Shades Of Grey: 10 things you need to know about Dakota Johnson and Charlie Hunnam
The hotly anticipated Fifty Shades Of Grey movie has finally been cast. They were never going to please everyone but there's definitely been some serious fan backlash to the casting of Charlie Hunnam and Dakota Johnson as Christian Grey and Anastasia Steele. So, we thought learning a little bit more about the actors may well help people come to terms with the news that RPatz didn't get the job...

Despite rumours that stars including Emma Watson, Kristin Stewart, Ryan Gosling or Ian Somerhalder could be taking on the roles, it comes as little surprise that less famous actors have been cast.

Dakota, 23, is the daughter of Miami Vice star Don Johnson and Melanie Griffith.

She appeared alongside Justin Timberlake in The Social Network and in the short-lived TV series Ben And Kate.

Brit actor Charlie, 33, was born in Newcastle and became a familiar face after appearing in kids' TV series Byker Grove.

The Fifty Shades movie is set for release in the US on 1st August next year and will be directed by Sam Taylor-Johnson.

It's thought producers cast Dakota because they wanted a young, up-and-coming star to play the role of virginal Anastasia, who falls for mysterious S&M-obsessed Christian.

And bosses obviously thought carefully about the perfect pair to play the on-screen lovers.

Controversially, author Bret Easton Ellis has claimed that Twilight star Robert Pattinson was actually the first choice for the role of Christian.

He tweeted on Monday: "E L James and I were at Rob Pattinson's house when she admitted that Rob was first choice for Christian.

"When E.L. James asked me who I thought should be Christian I said 'James Deen, of course,' and then she shoved me. We were both very wasted."

The choices of Dakota and Charlie have received a mixed reaction on Twitter.

One unhappy user wrote: "I was expecting Matt Bomer to play the role as Christian Grey for Fifty Shades of Grey. NOT Charlie Hunnam."

My bet is that Dakota Johnson has just suddenly become the most googled woman, ever.

Another said: "Ben Affleck as Batman and Charlie Hunnam as Christian Grey. What's next: Charlie Sheen as Jesus in 3D Bible movie…"

A third added: "Dakota johnson can say goodbye to any all respect she was hoping to have as an actress."

But a more positive Twitter user posted: "I'm so excited to hear 'Fifty Shades of Grey' cast Charlie Hunnam & Dakota Johnson. I hope the people that go see this movie enjoy it. #OMG."

Esme Riley
…
Fifty Shades Of Greyfilm
For all the best videos, memes and shareable news!