by Pascale Day Published on 18 September 2015

FriendsFest, Comedy Central’s new shrine to the 21 year old comedy, is based on Brick Lane’s Boiler Room in London, and it’s almost impossible to find. If you managed to get tickets for the event, then congrats. Seriously, bravo, because tickets for the £5 event sold out in thirteen minutes, and - OH.MY.GOD - we can see why.

I’m just kidding, of course. I didn't say that - I'm not quick enough. But Comedy Central's new exhibition is enough to send anyone into a frenzy of Friends quotes. It's amazing how this reasonably-sized building in East London can hold the entire essence of Britain's best loved import. First of all, there’s the memorabilia. Dozens of priceless artefacts from your favourite episodes: Phoebe’s copy of ‘Science Boy’, Rachel’s 18 page letter to Ross (“You fell asleep?!), and of course, the big white dog. I don’t think we were supposed to touch it, but I did anyway, because how could I not?

You can pick up a coffee, get a ‘Rachel’ blow dry, raid the fridge in the purple apartment, but we forwent all of these goodies as soon as we saw the demigod whose hair shines brighter than the sun: GUNTHER. Real life Gunther was sitting in front of us. On the orange sofa. Drinking coffee. Was I in one of those weird dreams that is kind of mudane and surreal at the same time? Was I going to wake up next to my boyfriend and bore him with all the details? NOPE. This was real. It was probably the most starstruck I’ve ever been, and I’ve met at least two people from Made In Chelsea before, guys.

We jumped into the cue that was already buzzing with excitement and fervour for the Gunther photo op. Because without the picture we're victims of that new age conundrum: If no one was there to take a photo, did it actually happen? I needed that proof, and I needed it bad. Oh man, Facebook was gonna be so jealous of this bad boy.

​I could hear him faintly, talking in that old Gunther voice. As we reached the front I noticed that Gunther's shirt matched my coat, and thus it was settled - we were going to be firm friends. We handed our phones over to the guy who had unwittingly become the camera monkey, I asked my good friend Gunth if he would mind doing a particular pose with us. I wanted to convey our new found friendship honestly and truthfully, so would he mind doing a fake laugh with us? And, God bless Gunth, he did it. He did it once, and then when my camera wouldn’t work, he did it a further three times.

Here’s The One Where We Had A Bloody Good Laugh With Our Top Pal Gunther:

After meeting Gunther for a catch up in Central Perk, we took a trip to Monica’s apartment, which took all of 10 seconds to reach. It was scarily accurate. The great thing about this tour is how much attention to detail has been paid. From the fake fountain with coloured umbrellas outside, to the answer phone message from Rachel that you can listen to on Monica’s retro landline phone (everyone still remembers landlines, right?) And, perhaps the highlight of the event (besides being able to actually walk through Monica’s front door) is the dressing up booth, where you can transform into your favourite character from your favourite episodes. The fancy dress box includes turkey hats and - get excited - wedding dresses, so you can sit around looking forlorn on Monica and Rachel’s sofa to get that perfect ‘The One With All The Wedding Dresses’ photo.

Thing is, it was pretty warm in there, and could we BE wearing any more clothes?

With such a high demand for tickets, I guess it begs the questions: just why are so many people still obsessed with a show that ended 11 years ago? It’s simple. It’s the same reason people visit the numerous Cheers! bars all over the world, or take photos on the stoop where Carrie Bradshaw once lived. It’s a classic. The characters are timeless and the the jokes are universal. Despite being a show from before the rise of social media and smart phones (not to mention not a single member of the gang is a blogger), Friends is a show that still speaks to the twentysomething men and women of today. We can still relate to the highs and lows of work, friendships, dating, and spending time with people whose company we actually enjoy.

Before we know it, it’s 10am and we’re cast back out into the harsh daylight of Brick Lane. It’s cold and dark compared to the warm lighting and even warmer embraces from my good friend Gunther. Then I hear Monica, standing behind me, whispering in my ear “Welcome to the real world! It sucks – you're going to love it.”​​​​​​​ 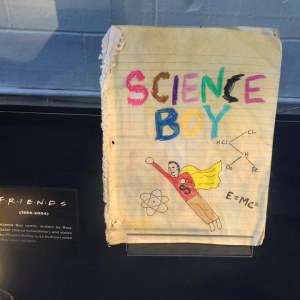 Have you been to FriendsFest? Let us know what you thought! @sofeminineUK

8 Of The Funniest Hairstyles From Friends