The Game of Thrones stars Lena Headley and Natalie Dormer, along with singer Beverley Knight, have joined forces with charity Plan UK for their newest campaign. Their aim? To eliminate child marriage and FGM once and for all.

Game of Thrones stars Lena Headley and Natalie Dormer might star in one of the goriest shows on television that sees women oppressed by tyrants, killed by soldiers and forced to marry against their will, but in reality the actors are hoping to change the way women are treated by supporting the Because I Am A Girl Campaign.

The campaign aims to aid the lives of millions of girls in the poorest parts of the world so children and teenagers can live safe from violence, be able to marry who they want, live without fear of violence and put an end to FGM (Female Genital Mutilation).

The ladies, along with singer Beverley Knight, have added their faces to the campaign with #FaceUp, which encourages people to add their face, written with the words “I’m putting girls rights where they can’t be ignored”, to the campaign.

Beverley said: "Plan UK is working hard to end these harmful practices worldwide but the stories of these girls just aren’t being heard. This campaign is vitally important." 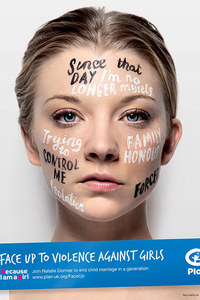 Lena continued, saying: “It fills me with hope that someday soon girls can grow up in a world that is free from these harmful practices. I urge everyone – men, boys, women and girls – to join me in standing up for girls’ rights’ with Plan UK.”

Natalie Dormer agreed, saying: “I believe we all have a part to play in the fight to end abuses like FGM and child marriage. It’s a powerful stance that we’re all taking, and by uniting together we can help keep millions of girls safe from harm.”

Want to add your face to the campaign? Go to Plan-uk.org here and tweet us your snap @sofeminineUK!

​FGM: The Government Finally Fights Back Against Female Genital Mutilation