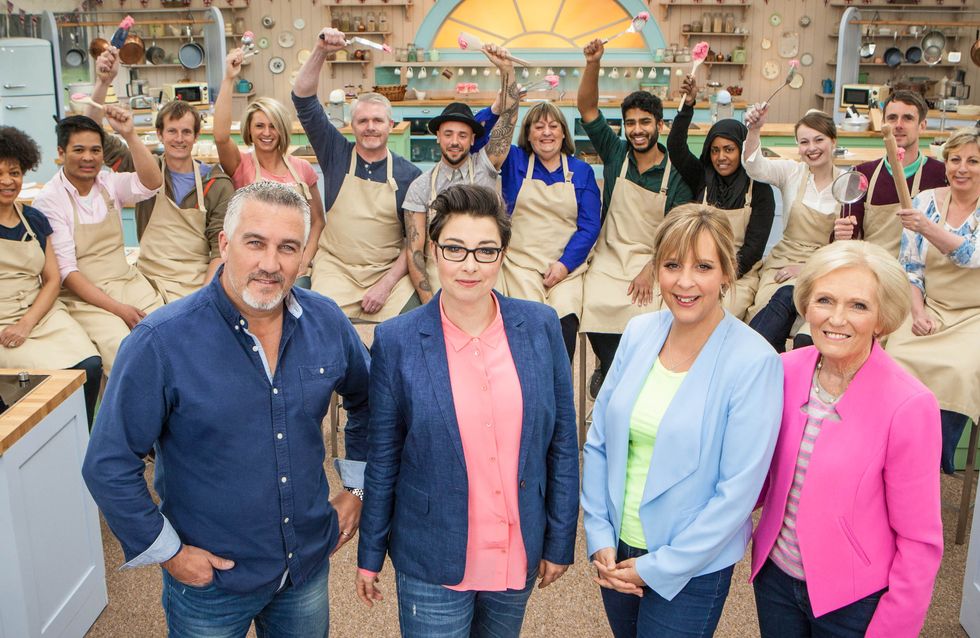 It's back, guys! It's really back! And whilst there's not been a #BinGate repeat (let's face it, there'll never be another BinGate), there have been tears a plenty and, like, a lot of biscuits. In this episode, Mary fails to catch up with what the kids are cookin' these days, and Paul Hollywood tries his hand at comedy. Here's our definitive list of GBBO twist and turns from last night's episode.

...And not 'biscuit', as we first thought. Amateurs.

2. Soggy bottoms are out

You heard it here first. Soggy Bottoms are a thing of the past. It’s currently the baking equivalent of the Crazy Frog. It’s all about the crack now. Crack jokes are rife in the GBBO camp: “Hopefully my crack will show,” quipped Ugne; “Time to reveal your cracks!” shouts Sue. We’ll let you know when the remix is out.

3. Tamal is the new GBBO babe

"It's hard being a babe, but someone's gotta do it," says Tamal to himself as he practises his smoulder in the mirror every morning. I think we can all agree that Tamal is the new James (series 3). This week, whilst making his biscotti, he said sweetly “It is very wet…Ooh dear…” and you could practically hear girls all over Britain swoon.

He also put sarcasm to great use when it came to making his Arlettes: “They’re really helpful instructions actually, they just say ‘make the dough’, which is great.” Everyone knows baking-based sarcasm is the way to woman’s heart.

From now on, Tamal can do anything he likes. Tamal could make a cake, smash it up with a rolling pin, rub it all over the floor and throw it at Mary, and he’d still make it through to the next week, because to get rid of those big beautiful doe eyes would be a crime against humanity, and Bezza knows that.

4. Paul Hollywood is on FIRE this week!

The jokes are a’flowing! First he can’t get the biscuit lid off the biscuit box - ho ho ho! Then, he doesn’t like Ugne’s bake….he loves it! Oh Paul Hollywood you cheeky fella. Get outta here, you!

5. Dorret should have really gone home this week

Last week I felt her pain when dear Dorret's tears were flowing as fast and freely as her unset chocolate mousse. But this week was something else. Using frog stamps for your biscuit’s, Dorret? I’m sick of it now. Get out.

6. The biscuit historian was very enthusiastic about biscuits

Professor Kate Williams talked about the garibaldi with such fervour that for a minute it felt like she was telling a group of children a whimsical and fantastical story, and not talking about biscuits.

Paul is a prison governor with a penchant for making delicate sugar flowers, which sounds suspicious like a plot line from High School Musical. But man is he serious about cake, and about prison. In last week’s episode, Sue joshes with the prison gov: “presumably all your bakes have to go through an X-ray machine?” to which he replied “well they're not that high security to be able to do that.” Good to know, Paul.

Her biscuit box was like something from my deepest, darkest nightmares.

9. Mary has only just discovered what a Jackfruit is

Mary Berry, alive since the beginning of time, 60 cookbooks published, has only just found out about the elusive Jackfruit. Come one Bezza, get with the times.

10. Everyone seems to have time to bake whilst at work?

Ok, Sandy baking with the kids at school I get. But Mat the firefighter (one ’t’ guys, ONE ’T’), baking teabag-shaped cookies for his workmates in between house fires? Do it at home, surely? What’s next, Tamal whisking meringue whilst administering a local anesthetic? (Tamal can do anything he wants because he is a SAINT.)

11. The biscuit boxes round was emotional AF

We were expecting Mary to destroy those biscuit boxes like Kristen Wiig at a bridal shower, but instead Alvin was crying like the sweetheart he is about his incomplete box.

What did you think of last night's episode? Tweet us! @sofeminineUK

This piece was written by Pascale. Follow her here: @Pas__

The Most Scandalous Great British Bake Off Moments​