Uh oh! Harry Styles is going to have to start singing some Christmas carols pronto as apparently he is not in Christmas spirit yet. Should we start calling him Harry Scrooge? Mr Scrooge - sorry Styles - may be in such a Bah Humbug mood as he’s seen Kendall Jenner’s brother diss their relationship. Although nothing has been confirmed between the couple, according to Kendall's brother it will be Harry who ends up heart broken!

The 19-year-old singer, who should be snacking on mince pies and hanging up his stocking in preparation of the 25th December, has taken to Twitter to bemoan the run-up to the holiday and his lack of enthusiasm. 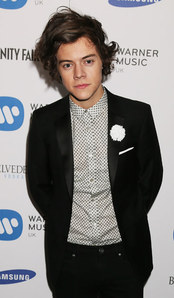 He wrote: "It still feel like it's too early to say 'Merry Christmas'. And it's just not."

No, it’s not! It’s Christmas on Wednesday Mr grumpy! Maybe on Tuesday night he’ll get a visit from the ghosts of Christmas past, present and future – it seems like that’s the only thing that will cheer him up at the moment!

The curly haired member of One Direction has had a lot on his plate in the lead up to Christmas though, as the band have been busy promoting their new album Midnight Memories and have travelled across Europe over the last couple of months.

He’d better catch up with the good old Christmas spirit quickly! Someone get that boy some reindeer ears and a DVD of Muppets Christmas Carol already!

He may also be in a bit of a sour mood as he has seen his rumoured flame Kendall Jenner’s brother’s interview with New York Daily News, where he spilled the beans about Kendall’s relationship with Harry.

He said: “I hate to tell you this, but Kendall will be doing the heartbreaking.

“I'm sure she's having a fun time with him. She has a very level headed, great head on her shoulders. But they are both so young. [Kendall] is at that age where dating is a lot of fun."

Ouch! Perhaps old Hazza isn’t used to being the one who is ditched – it sounds like he was definitely the one to have broken up with Taylor Swift after her many passive-aggressive award-ceremony accusations!

Kendall’s half-brother, Brody, continued: “It sounds like a match made in heaven. That's what it sounds like, but I've never met him.

"My dad told me that Harry Styles plays golf, so that's cool.''

AHA! So the Best Song Ever singer has met Kendall’s dad Bruce, has he? Well, we sort of assumed that anyway, since earlier this year he was hanging around in his beach house a fair bit!

Do you think the two are a couple? Tweet us @sofeminineUK