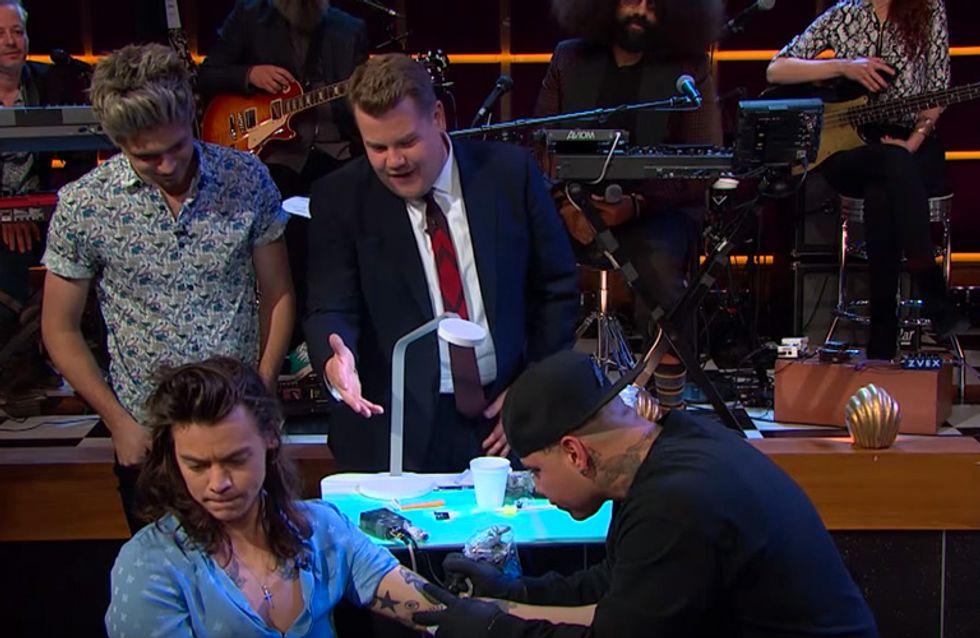 For anyone who has been living under a rock, James Corden was recently given his own chat show in the USA, The Late Late Show, and he's pretty good in bringing in the viewers! Whether it's him cruising around with Justin Bieber or acting out Tom Hanks' filmography, the man knows what the people want! But this time we think he's outdone himself by playing tattoo roulette with the 1D boys which led Harry to get inked live on his show.

We still can't believe the One Direction boys agreed to it, but James Corden played the insane game of 'Tattoo Roulette', leading Harry Styles to have 'late late' in tribute to James's show tattooed on his forearm.

In the style of Deal Or No Deal, each band member (and James Corden) chose a box. While four of them read 'safe', one read 'tattoo'. If James lost, he would have to have a One Direction tat. If the boys lost, it was 'Late Late'. Tough going Harry.

Although we knew Harry was going to lose, it is hilariously intense as the boys take it in turn to open their boxes, with Niall as the only uninked member of 1D being increasingly nervous as Liam, Louis and James are all safe. Then Harry opens his 'tattoo' box and the reaction is just hilarious. Check it out for yourself...

We think if James plays this game again he'll lose eventually though, right?! Tweet us @sofeminineUK!

Why Love Actually Isn't Actually A Happy Film At All