Hugh Jackman has been treated for skin cancer

Hugh Jackman has revealed on his Instagram account that he went to get a suspicious mark checked out and it turned out to be a form of skin cancer. The Wolverine actor posted a picture of himself with a plaster on his nose from the removal, and urged fans to take a trip to the doctor if they were worried about something. He’s a good guy, that Hugh Jackman!

Hugh Jackman has revealed that he has been treated for skin cancer. We hope he’s alright!

The 45-year-old actor posted a photo of himself on Instagram with a plaster over his nose where the growth was removed.

He praised his wife, Deborra-Lee Furness, for telling him to get the suspicious looking mark on his nose checked, and urged his fans to go to the doctor themselves if they were worried about something.

Hugh wrote: "Deb said to get the mark on my nose checked. Boy, was she right!

“I had a basil cell carcinoma. Please don’t be foolish like me. Get yourself checked."

The Les Miserables actor also gave some sound advice to sign off with, writing:

Hugh isn’t the only celebrity to use their status to encourage fans to care more about their health though, as Samuel L. Jackson has also been vocal about cancer, encouraging men to be more careful about their wellbeing.
​
He said: “Guys don’t talk about their health issues, unless they’ve got a sprained ankle.

Samuel said he wanted to make a difference when he found out friends had secretly been treated for cancer and not told anybody.

He put his weight behind a charity named One For The Boys, and spoke about the cause in June, saying: “When they started talking about it, I realised most guys don’t talk to other guys about what their medical conditions are – especially cancer conditions.

“And most guys think the only cancer guys get is prostate cancer, or they look at TV and see it as basically a woman’s problem, but it’s not.

“So I realised that we do really need to make men aware of the fact that cancer is a very serious thing for guys.”

The celebs certainly seem to be doing their bit, and from the sounds of things Hugh is not letting the health scare deter him from his work; it has been reported that he is already in negotiations for another instalment of The Wolverine and will star in the upcoming film X-Men: Days of Future Past. 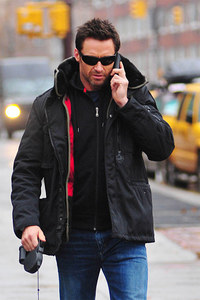