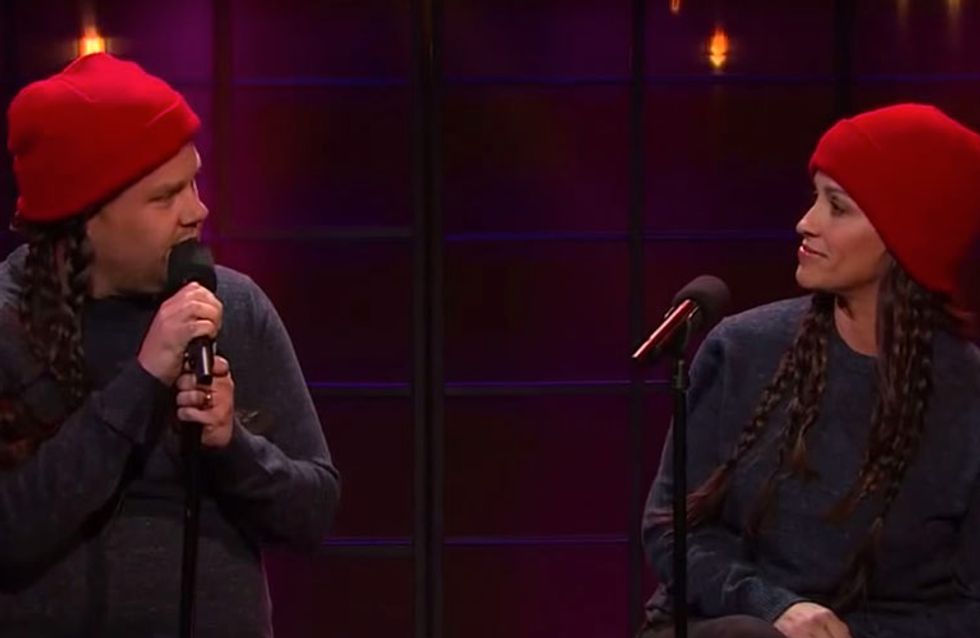 Everyone knows the lyrics to Ironic. It's that song that comes on about halfway through a disco or in a particularly cheesy nightclub, and no one really knows how to feel about it until the chorus arrives and you all scream "IT'S LIKE RAAAAAAIN ON YOUR WEDDING DAY" together. However, now Alanis Morissette has updated the lyrics for Millennials with the help of James Corden, and it is actually pretty hilarious...

Appearing on the Late Late Show with James Corden, Alanis reworked the lyrics to include everything the 21st century has began relying on, from Snapchat to Uber and not only does it still make total sense, its also hilarious. She wears the same red beanie from the original music video before being joined by James Corden wearing identical braids and hat and clearly having the time of his life.

She also berates the fact that there are no women talk show hosts in the US, leading to a cheeky exchange between the two of them as she sings: "It's ten thousand male last night hosts when all you want is one woman, seriously", to which Corden replies: "singing the duet of your dreams then Alanis Morrissette shouting at you..."

This has put us in such a 90s tunes mood now! Anyone else going to be listening Now That's What I Call Music 35 today?! Tweet us @sofeminineUK!

This piece was written by Emmy Griffiths. Tweet her about irony ​@emmyfg!