James Arthur has been causing plenty of controversy lately with his shocking behaviour. As well as being critical of fellow artists, including One Direction and Matt Cardle, he recently made homophobic comments during a rap battle. Despite apologising profusely for his actions during the X Factor 10th Anniversary, the fans still didn’t feel all that forgiving, and now the X Factor judge that helped bring James to the top, Louis Walsh, has also slammed the singer for his recent behaviour.

Louis Walsh has given James Arthur an angry piece of his mind, slamming the young singer's attitude.

The 25-year-old Middlesborough-born lad, who won The X Factor in 2012, has been upsetting a lot of people – mostly One Direction fans – by slating the former X Factor stars.

In early November, he said that One Direction were a “marketing product”, then after receiving criticism, tweeted: “When I said 1D were about marketing certain members of the band turned on me too…I meant no offence and they were pretty awful to me too so I don’t suffer them.” 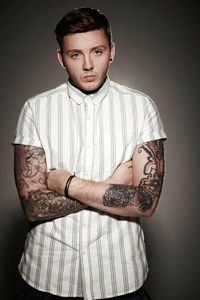 The Impossible singer’s already dubious reputation was exacerbated when he performed a rap on BBC Radio 1Xtra which included the comment “you f***ing queer”, leading to a petition being started with over 9,000 signatures to ban him from the X Factor anniversary show, in which he apologised like crazy for his actions.

He said: “I’ve made some very silly mistakes. I want to thank the X Factor for giving me this opportunity. I want to say sorry for abusing my position as an X Factor winner because I owe everything to this thing.”

This isn’t enough for Louis though, who sounds pretty disgruntled by his behaviour.

The Daily Star has reported that the music competition judge said: “He’s a competition winner that got lucky. He came from a little bedsit, he should be a lot more grateful and be a lot more respectful to everybody. Don’t get me going.

“Nicole worked so hard with him last year – she got him into the final. He doesn’t look comfortable in his own skin. He has talent but he’s not Bob Dylan.”

Louis then went on to protect the 1D boys, arguably The X Factor’s biggest success story.

He said: “You can’t be slagging off One Direction, you can’t slag off success. I think they’re good role models and show the pop business is alive and well.”

James has since disappeared from Twitter and cancelled several of his shows during to “exhaustion”. It’s probably best that you wait for this all to blow over James!

Do you think James is ungrateful? Tweet us @sofeminineUK