Katie Holmes to give evidence in Tom Cruise’s libel lawsuit?

Katie Holmes could be called on to give evidence against her ex-husband Tom Cruise as he goes head-to-head with magazine publishers Bauer Media in a $50 million libel lawsuit. Life & Style magazine claimed he had “abandoned” his 7-year-old daughter, Suri, an accusation that Tom has vehemently denied. As the court case rages, it looks like Katie may well be asked to take the stand to talk about Tom’s parenting and their marriage.

Things are heating up in Tom Cruise's $50 million libel lawsuit against Life & Style magazine, as apparently Bauer Media, the magazine publishers, are considering asking Katie Holmes for a testimonial.

Argh. An insight into the marriage and divorce of TomKat straight from the horse’s mouth? Is it awful that we are excited about this?

Does Tom Cruise want to get back together with Katie Holmes?
TomKat do go through some drama, don’t they? Since splitting up in June 2012, the two of them have not been seen together at all, leading Tom to be accused of scarcely seeing their daughter, Suri. We all assumed that the two were entirely finished with each other, but now, apparently, Tom wants Katie back! We think it may be mission impossible, but he’s managed that four times before... (Sorry.) 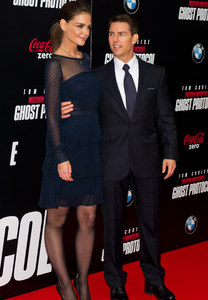 This move would compel the Batman Begins star to speak honestly about her arguably odd marriage to Tom Cruise, which she reportedly left to protect herself and her daughter Suri against the highly controversial Scientology faith.

According to the deposition, he also said: “I tolerate a tremendous amount and I’m very privileged to be able to have the life that I have, and I believe that. But there is a line that I draw for myself and that’s it. And I asked for an apology. I asked for a retraction. They denied it.”

A source connected with the case revealed Katie Holmes’s involvement in the trial to RadarOnline. They said: “The decision hasn’t been made yet. It’s certainly possible. A decision is likely to be finalised in the next few months.”

If this does happen, Katie could be questioned over a lot of behind-the-scenes information about her marriage breakdown as she shocked her husband and filed for divorce after a whirlwind, sofa-bouncing romance and five-year marriage.

We’re excited, and we feel guilty about it.

RadarOnline also reportedly received a series of emails in which the Hollywood star’s legal team alleged that Katie Holmes had set up staged paparazzi photographs trying to ‘one up’ Cruise.

Uh oh, not an amicable break up then?

However, this possible request that Katie could be asked to testify may lead to more legal difficulties, as the couple are believed to have signed a confidentiality agreement as part of their split.

Do you think Katie Holmes will testify against Tom Cruise? Tweet us @sofeminineUK

by the editorial team
+
All the news about Katie Holmes