by Alison Potter Published on 26 November 2013 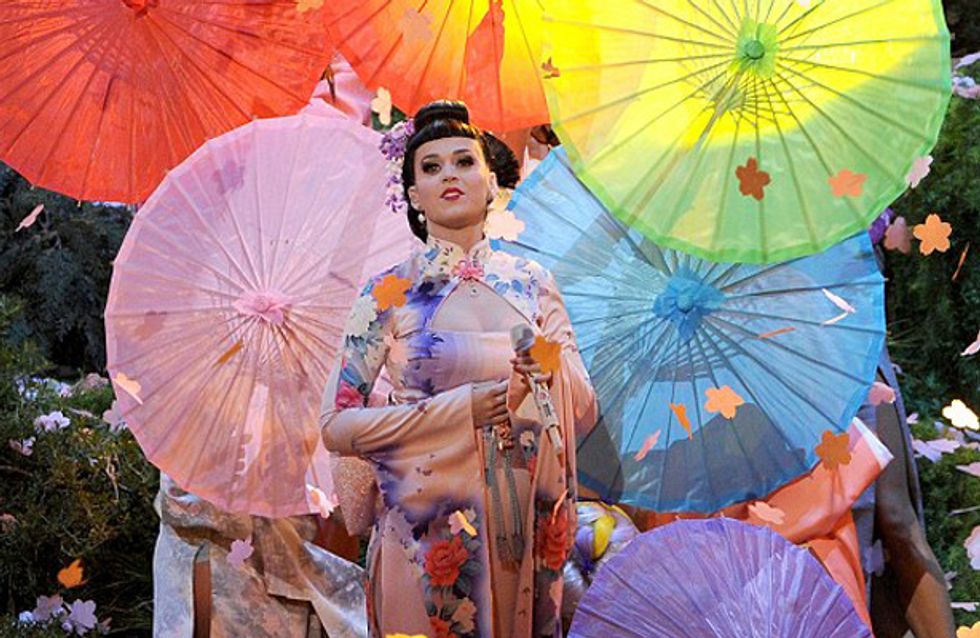 Katy Perry was probably hoping to pull a Miley Cyrus by having an awards show performance that everyone couldn’t stop talking about. But sadly it was for all the wrong reasons, as the Roar singer has since found herself embroiled in a bitter racism row following her incredibly cringy Japanese Geisha-inspired AMAs performance.

Katy Perry has been met with a wave of criticism after her ill-advised Japanese-inspired performance at the American Music Awards.

Performing the newest single Unconditionally off her latest album Prism, the 28-year-old took to the stage in a pale pink traditional kimono, with whitening face make-up and stereotypical Geisha hairstyle.

AMA viewers quickly took to social media to point out that the raven-haired singer’s performance could be seen as a bit racist towards the Japanese.

One user wrote: “Oh, good. Katy Perry is dressed as a geisha. I was afraid her sharp vocals would outshine her racism.”

Another added: “What the hell, Katy Perry. What the hell, music industry. Is "do a racist performance to get press" gonna be a thing now? Please let's not.”

The New York Post chimed in, adding: “She wouldn’t dream of black facing for a performance, nor is it very likely that she’d ever approve a Navajo-themed number.

“So why did Katy Perry think it was OK to dress up like a Japanese Geisha for the opening act of the night…the fact that Perry didn’t see anything offensive in her routine is astonishing.”

So far Katy hasn’t addressed the controversy, but her stylist Johnny Wujek has spoken up for the pop star to defend her Asian-themed performance.

​He told E! News: “Katy and I both love Japan. The people are so kind, there’s so much there visually.

“Just walking around [in Japan], you feel something. We wanted to try and encompass that in the performance somehow, almost a tribute.”

Johnny continued: “We had the most amazing woman helping us from this store in Pasadena, Kimono no Kobeya. She oversaw everything we were doing and made sure that it maintained all of its authenticity…

“…All of the dancers wore original geishas [dresses], and Katy's version was a little more modern. For her we took a stunning real kimono and reworked it more into a gown.”

Sadly this isn’t the first time Katy Perry has come under fire for her appropriation of Japanese culture.

On Jimmy Kimmel’s late night show in June she sparked controversy when she spoke about Japanese culture, exclaiming: “I’m so obsessed with you [Japanese race] I want to skin you and wear you like Versace!”

Eeek! What do you think about Katy’s AMA performance? Tweet us @SofeminineUK!

Dev Patel a.k.a. Anwar Kharral, then
by the editorial team