Kendall Jenner reality TV star and model has been strutting her stuff in the Marc Jacobs 2014 fall show at New York Fashion Week, adopting a new high fashion hairstyle – don’t be alarmed, it is just a wig – and no eyebrows to speak of. It looks like the 18-year-old received her fair share of criticism as she bared her chest in a see-through brown top, but never fear – Khloe will defend her sister to the death!

Khloe Kardashian has leapt to her sister’s defence after she received criticism for wearing a sheer top that exposed her chest in the Marc Jacobs 2014 fall show at New York Fashion Week.

Harry Styles’ rumoured girlfriend showed how it was done by strutting down the catwalk in dramatic high fashion make up, including bleached out eyebrows and a blunt cut wig, hiding her usual long locks.

The 18-year-old has had aspirations to become a model from a young age, as she was signed up to a modelling agency at the age of 14 and was signed up to The Society Management along with Victoria’s Secret Angels Adriana Lima and Lindsey Wixson only this year.

Khloe Kardashian was cheering on her stunning sister from the side lines and posted a snap on Instagram of Kandell with the caption: “My baby sister killed it today walking in the Marc Jacobs fashion show!!! Kenny you are so dope to me!!! Congrats my baby!!! #NYFW #MarcJacobs #ProudSis”

However, haters have been dissing the model, with one Twitter user writing: “Dunno how Kendall Jenner could walk down a catwalk with her tits out like that”, and other writing: “that picture of Kendall Jenner on the catwalk is literally the scariest thing I’ve seen in my life.”

But never fear Kendall, big sister Khloe’s here! After clearly seeing some of the criticism, Khloe wrote: “She’s too dope for you 2 understand! Yall would trade places with her in a second! The hate is real! Lol bye haters! #ModelLife #Simple”.

She also tweeted: “Basic b****es NOT wanted” and “Oops I keep forgetting I’m supposed to be on my ‘don’t sweat the small stuff’ish… But I just can’t pass up a good rant #SorryNotSorry.”

Whilst Kendall has stayed quiet in the face of the criticism, she did retweet her big sister. Kudos for taking the high ground Kenny!

We thought Harry Styles might be at the show to check out his girlfriend, but he has nowhere to be found. However, he recently chatted to Teen Now magazine about what sort of boyfriend he is, and said: “I can get quite soppy when it comes to girls, especially when I really like them,” so we’re guessing he’ll be making it up to Kendall somehow!

What do you think about Kendall’s look? Tweet us @sofeminineUK 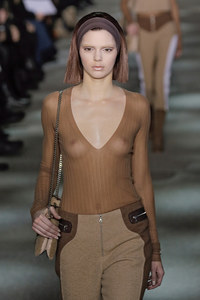 by the editorial team
+
All the news about Kendall Jenner