Glee star Lea Michele chatted about her relationship with co-star - and real-life boyfriend - Cory Monteith before his death in July on Ellen DeGeneres. We are in awe of her inner strength as she spoke about getting back to work following his passing, her feelings about their relationship, and how she intends to carry on with her life without him in it.

Lea Michele has spoken about how happy she was with her boyfriend Cory Monteith before he passed away in July.

Speaking frankly about their relationship and moving forwards from her grief on The Ellen DeGeneres Show, Lea said that she was still getting to terms with the loss, and had felt like “the luckiest girl in the world” when they were together. 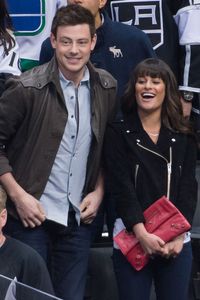 The 27-year-old actress, who was promoting her new single Cannonball, reminisced with Ellen about the 31-year-old Glee star, and shared memories about when Cory revealed they were dating on Ellen’s show.

She said: “It's one of my favourite memories. I remember when he came home that night he kind of puffed out his chest and he was like, ‘I talked about you on Ellen today.’

“I was so happy. He's such a private person and I literally lived every day of my life feeling like the luckiest girl in the whole world.”

The Glee star, who plays the show’s main character Rachel Berry, appeared in the tribute episode for Cory’s character, Finn Hudson, in Cory’s memory, and sang Make You Feel My Love by Adele.​

Speaking of getting back to work, she said that the Glee creator Ryan Murphy was extremely supportive.

“He came to Kate's house [where Lea was residing] and he said ‘what do you want to do, whatever you want to do we'll do’,” Lea told Ellen.

“I said I have to go back to work. We have to. They're my family and what people also don't understand is that going to work is no harder than being at home and being in the house and opening up a closet and seeing a pair of shoes.

“This grief goes with you every day whatever you're doing. There're great moments, hard moments, so I'd rather - for me - be at work with the people who I love that are going through and it obviously has its own triggers, but at the end of the day I feel so safe there. And like I said, they're my family.”

Lea then talked about pushing on with her life, and said: “I'm just trying to do my best for him because I know that that's what he would have wanted, and to just do my best and to you know, hopefully make something positive for where I go in the rest of my life.”

The interview is heartbreaking, but gives us so much admiration for Lea Michele.

Did you watch the tribute episode of Glee in Cory’s memory? Tweet us @sofeminineUK