Racing car pro Lewis Hamilton and X Factor judge Nicole Scherzinger have had their ups and downs, but now it looks like things are firmly back on for the pair. Although they’ve tried to keep their recent reunion hidden from the public eye, rumour has it the pair have been back together for more than a month and that the Formula 1 ace is set to propose! That will certainly be one way to ring in the New Year!

Lewis Hamilton is secretly set to propose to his on-off girlfriend Nicole Scherzinger.

The pair – who have supposedly been back together for a month – have been spotted together several times in recent weeks, but are both still keen to keep their reunion top secret.

The 35-year-old X Factor judge apparently wants to be “absolutely sure” about their future together before they go public.

Nicole’s sense of caution is understandable, as her and Lewis have split three times during their five-year relationship.

But reportedly the 28-year-old racing driver is so keen to prove his dedication and devotion to the singer, that he’s got a ring and is planning to pop the big question in California after Christmas.

You know what they say – If you liked it, then you shoulda put a ring on it, and it looks like Lewis intends to! 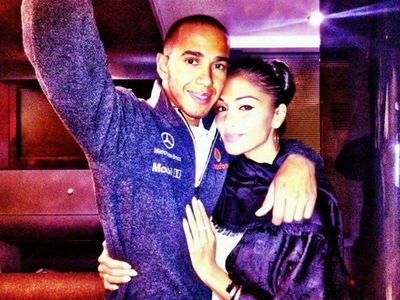 Close friends of the couple told The Daily Star: “This will be the third time Lewis has planned to pop the question.

“But he believes this time is different. Both of them have benefited from the split, realising it’s impossible for them to be without each other.

“He wants to take Nicole to romantic Carmel and present her with the ring. There’s no doubt in his mind she’ll say yes.”

Not too long ago Lewis and Nicole were seen holding talks in a quiet London hotel, which sparked rumours of a reconciliation.

It’s also claimed that they both spent Thanksgiving together at Lewis' family home in Hertfordshire last week, but publicly Scherzy still remains insistent that they are officially still just friends.

The source continued: “Lewis was doing all the chasing. Nicole only agreed to take him back on the condition that they tie the knot next year."

Following this series of the X Factor Nicole is supposedly thought to be leaving the show to attempt another stab at a solo career.

But will she being doing it as a married woman? We hope so – Nic and Lewis are so cute together!

Do you think the pair will end up tying the knot? Tweet us @sofeminineUK.