Lil’ Kim is welcoming a lil’ one of her own! Rapper shows off baby bump at NYFW

Rapper Lil’ Kim showed off her baby bump yesterday at New York Fashion week, when she took the stage at The Blonds after-party to announce her pregnancy. This will be the 39-year-old rapper’s first child, and she couldn’t be happier. Lil’ Kim is keeping quiet on who the baby’s father is, but she says she can’t wait to be a mother!

Grammy award winning rapper Lil’ Kim took the stage at The Blonds Fashion Week after-party in NYC Wednesday night to announce that she is pregnant. “I’m a mom, but I can turn it up a little!” she said.

Her beautifully burgeoning belly was on full display at New York Fashion Week in a gorgeous black velvet patterned dress. 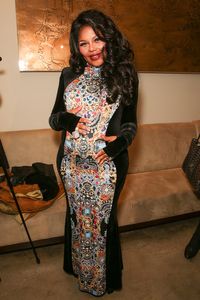 The self-proclaimed “Queen of Rap” is famous for hits like “Crush on You” and “Lady Marmalade”. Her first studio album in 1996 “Hard Core” is certified double-platinum in the U.S.

Parenthood will be a new challenge for the female rapper, who is infamous for not only her many hit songs, but for her wild ways and fights with diva rivals like Nicki Minaj. Lil’ Kim was sentenced to a year in prison in 2005 for lying under oath to a federal grand jury back in 2001 about a shooting in New York.

Though the rapper is still as hardcore as ever, she has turned over a new leaf and could not be happier about the thought of motherhood! “I’m so excited!” she tells Us Weekly. “I’m a few months along, I can’t wait to be a mom!”

Lil’ Kim also performed at The Blonds after-party, where she paid tribute to the late rapper Notorious B.I.G., saying, “It’s also going to be Biggie’s birthday and the anniversary of his death soon so we [as she pointed to her belly] love you.”

The rapper let her pregnancy glow shine at New York Fashion Week, and we can’t wait to see the rapper take on motherhood!

How excited are you about Lil’ Kim’s pregnancy? Are you curious about the father? Tweet us @sofeminineUK!