Little Mix might have done fabulously well after winning the X Factor, but all success must come at a cost, and the girls has recently mentioned how much they miss spending time with their families. Well it is the holidays, so we can understand that they’d be feeling a little bit lonesome. Who wants to be in gorgeous 5 star hotels when you could be at home glugging mulled wine and playing Monopoly with your many cousins? Actually, they both sound pretty appealing!

The Little Mix girls have opened up about how hard they find spending so much time away from their families.

The band members Jade Thirwall, Perrie Edwards, Leigh-Anne Pinnock, Jesy Nelson have said that that don’t only miss them, but also feel guilty about spending so much time away from their parents. Ah girls, it’s not your fault, you’re too busy singing dancing and generally being sassy!

Little Mix's Jade Thirlwall plans to get a boob job 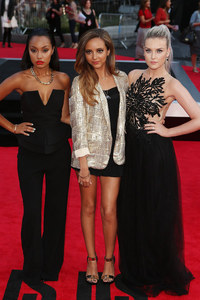 According to Cosmopolitan magazine, the girls said the worst part of touring is missing their family.

“I feel really guilty because we never get to see them. It's quite upsetting because to our families it's like we've just gone.”

The singers were quick to praise their families for all of their help getting them to the top by supporting their X Factor ambitions though, and expressed their guilt that they are now suffering for it, as Jesy continued: "They were the ones who helped us realise our dreams but now they're sat at home and we're not there."

Perrie also name-dropped her fiancé – who wouldn’t, it’s only flipping Zayn Malik from One Direction – and all the Christmas shopping she did for him which he has already gone and opened! So spoilt!

She joked: “This year I thought, 'I’m going ahead and buying everything [early]’, but he’s opened them all!”

"But then again, I’m not really that hard to persuade, he was like 'Pleeeeeease can I open them?’ And I was like, 'Go on then' just because I want to play with it."

At least the girls are in England though, and were in Manchester last night performing their new single Little Me.

​They also confirmed they would be home for Christmas for a nice break before getting right back to work with a UK tour in May 2014.

Do you think it must be difficult being a popstar? Tweet us @sofeminineUK

Is another member of Little Mix engaged?!

by the editorial team
+
All the news about Jade Thirlwall