After Matt Smith’s Doctor died and regenerated into Peter Capaldi in last year’s Christmas Special, we thought it would be the last time we heard from Matt in Doctor Who. Right? Wrong! It sounds too implausible to be true, and yet, this is science fiction ladies and gentlemen, and in the wibbly wobbly timey wimey world of Doctor Who, anything can happen. Matt Smith will be making a cameo to say goodbye…again.

We all shed a tear when Matt Smith regenerated in last year’s Christmas Special, but it looks like the eleventh Doctor isn’t leaving us quite yet!

After regenerating from old age and turning into 55-year-old Peter Capaldi, Matt Smith’s Doctor leaves his companion Clara with a new, extremely different Time Lord who showrunner Stephan Moffat described as: “mad and dangerous and difficult.” 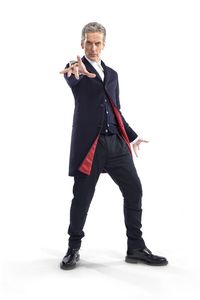 “It sounds confusing but he is ringing the future from the past and wants to assure Clara this new man is still Doctor Who.”

It looks like Matt’s phone call will be in the first episode of the new series which is due to premiere in Autumn, as Clara is wearing the same outfit as from the Christmas special.

An eagle eyed fan also captured the filming on the moment taking place, where Clara is huddled in the corner with her phone pressed to her ear before turning and exchanging words with Capaldi, then hugging him.

Since the series reboot, this will be the second time the companion stuck around after a regeneration, with Rose (Billie Piper) remaining the companion after the ninth Doctor (Christopher Eccleston) turned into the tenth (David Tennant).

River Song could also be returning as another of the Doctor’s companions in the run, meaning that she would be the only character presenter for the tenth, eleventh and twelfth regenerations. However, apparently Matt isn’t too enthused with the idea of sharing his onscreen wife with another actor. So possessive!

He said: “I said this to Steven [Moffat], I was like ‘Listen, just don’t. Just not Alex. Anyone else, but don’t give him River’ – but Peter is the Doctor now so hey, what can I do?

“I think that Steven will be planning things that are going to unfold over years, I think he’ll reinvent the folklore, and it will become Peter’s folklore. But I am really proud of the fact that Alex was part of Number Eleven’s life. My wife!”

Are you ready for the radically different Doctor? Tweet us @sofeminineUK