Meet Britney Spears' New Man: Everything You Need To Know

Our girl Britney finally managed to move on from the l-o-s-e-r she was dating earlier this year. And the new knight in shining armour? Film producer Charlie Ebersol. He comes from a Hollywood family and has an award-winning smile, so naturally, we approve. Get all the (surprising) deets on the new man here. Think he can handle Brit Brit?

So we think we speak for everybody when we say that we are very relieved that Britney (we've known her since childhood, so we're assuming a first name basis is okay with her) dumped her ex-boyfriend David Lucado after he was caught hooking up with another girl on camera. If you don't remember David Lucado, he was the stout looking guy that seemed to only own clothing from the Virginia Tech bookstore. Woof. If your memory needs refreshing, please see below:

Well Brit Brit has moved on to Charlie Ebersol, and let me just say we can already tell it's an upgrade. They met through friends and have reportedly been dating for a few weeks. Charlie (we're on a first name basis because any friends of Britney's is a friend of ours) is the son of famed SNL producer and NBC Sports Chairman Dick Ebersol, and is a film producer himself. He's 31 (Brit is 32) and he used to date tennis smokeshow Maria Sharapova:

The real reason this guy tickles our hearts? Back in 2004, he was in a private plane crash along with his father, brother and another producer. Charlie's little brother, Teddy, died in the crash, although Charlie was able to save his father Dick by pulling him out of the airplane wreckage through the front of the plane. Two other crew members died in the wreck, the whiplash of the crash was reportedly so violent that Charlie and his father's shoes were ripped off. When the plane crashed the temperature was below freezing. Looking at how awful the plane crash was I think it's safe to say Charlie saving his dad's life one hundo percent makes him a hero.

According to a Perez Hilton source, "He is the sweetest guy ever and they are very much enjoying getting to know one another. They are both very happy and having fun. It's just the beginning so no idea if it will become serious but right now they are having a lot of fun together." Oh, and did we mention that he is producing perhaps the most anticipated sequel ever? SPACE JAM 2. We love this guy.

This dude seems like a real winner, so we hope him and Britney make it for the long haul. Enjoy some more pics of this handsome gentleman, and please note that he is good friends with Britney's former Mickey Mouse Club teammate Ryan Gosling. If they double date with Ryan, Eva and baby Esmeralda...We. Will. Die. 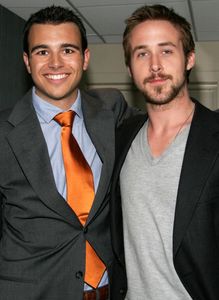 Charlie, if you ever think about making out with another chick on camera, just remember:

Do you think Charlie and Britney will last? Tweet at us! @sofeminineUK