Despite announcing their separation at the end of October after three years of marriage, Miranda Kerr and Orlando Bloom are keeping things civil for the sake of their two-year-old son Flynn. Just this weekend they had a fun action-packed family weekend together, this is despite rumours that the Victoria’s Secret model already has a new man, Australian billionaire James Packer.

Since splitting from her actor husband Orlando Bloom at the end of October, Miranda Kerr has been linked to Justin Bieber and Leonardo DiCaprio.

Aussie magazine Woman’s Day report that the pair – who are said to be old friends – are having a “red hot romance”, following James’ split with his model wife Erica Baxter three months ago.

Tellingly neither the father-of-two nor Miranda have denied that they are in a relationship, despite being allegedly approached by journalists to comment on the rumours. 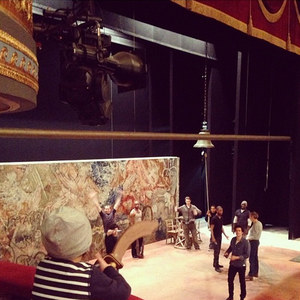 Just as the model’s new romance is revealed, the 30-year-old was at great pains to put on a united front this weekend with her former hubby Orlando in New York.

Miranda uploaded a pic of their adorable son Flynn to Instagram showing the little tot watching his dad rehearse on stage for that evening’s performance of Romeo and Juliet on Broadway.

The cute toddler is holding up a wooden sword as his dad looks up from below – we wonder if that’s a prop from Orlando’s Pirates Of The Caribbean days?

The snap, which has already been liked over 100,000 times on Instagram, was captioned by the proud mama: "Flynn having such a great time watching Daddy on stage @romeojulietbway."

It's nice to see the parents getting along so well despite splitting!

Do you wish Orlando and Miranda would get back together? Tweet us @sofeminineuk.​

How Miranda Kerr Made Sneakers Look Sexier Than Ever

by the editorial team
+
All the news about Miranda Kerr