Apparently not all celebrities love the idea of being scantily clad in front of millions of people – ahem, Miley Cyrus – and none more than Strictly Come Dancing star Natalie Gumede, who requested that her dresses for the SCD 2013 final be given more material as she thought they were too skimpy. It sounds like a bit of a diva move, but we wouldn’t be all that thrilled about baring all every Saturday and Sunday night!

Natalie Gumede is not all that happy with her Strictly Come Dancing costumes, and has requested that more material be added to them as they are too skimpy.

The 29-year-old actor, who played Kirsty Soames in Coronation Street, has proven she is the cream of the dancing crop by making it to the series final along with Susanna Reid, Sophie Ellis-Bextor and Abbey Clancy. 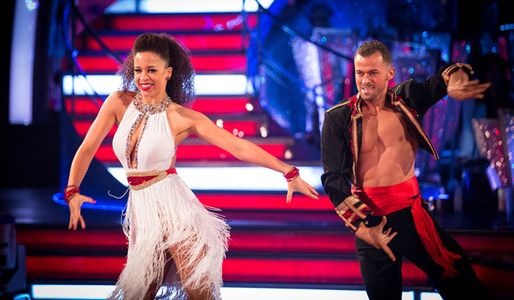 Regarding her costumes, Natalie told the Daily Mail: “It's kind of down to costume in a way. I kind of turn up on Friday and see how much material is in the dress and nine times out of 10 I get some added.”

Apparently the skimpy, sparkling outfits aren’t especially her favourite thing in the world, and she would rather be comfortable than wear something she was worried about. Good for you, Natalie!

“I think sometimes costume [department] see you objectively and sort of go, well that looks good because they're seeing the show and say 'well you look great in that', whereas as a person you have to be comfortable so it's just finding that happy medium and they will always work with you on that.”

Natalie, who has been shimmying her way to the final with her partner Artem Chigvinstev, is apparently lagging behind the other girls in the final though, with William Hill offering her at 9-1 odds, with Susanna the 6-5 favourite, followed by Clancy 9-4 and Sophie at 5-2.

Anything goes on final night though!

Singer Sophie Ellis-Bextor has also been chatting about the final and has clearly loved her time on the show. She said: “I've never really been so petrified so regularly and then had that rush of getting through it and it working out and that's an amazing reward for the nerves you feel beforehand.

“My dad's been joking with me that I have to go through a similar Strictly kind of experience but with other life skills so maybe you learn a different language every week and then perform a monologue in that language on Saturday nights or different instruments would be good, or maybe household skills.

“I've got the foxtrot and now I need to know how to do some plumbing and basic electrical work.”