by Emmy Griffiths Published on 6 August 2015 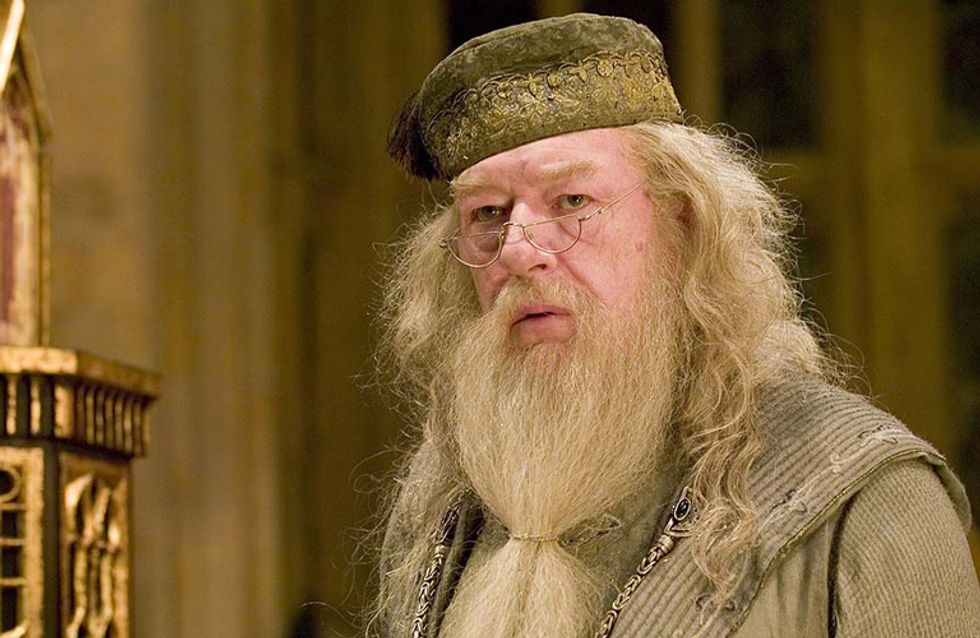 Since the series is well and truly over and it's still at least a year before we get our grubby little paws on the HP spin-off, Fantastic Beasts and Where To Find Them, it's fair to say that us Potheads have had plenty of time on our hands to pore over the content and come up with new ideas and theories. Now Tumblr user harryjxamespotter has come out with a cracker that we just HAD to share, and JK Rowling has come out and said it's her favourite theory yet. DUMBLEDEATH CONFIRMED.

The theory points to Dumbledore being a symbol rather than just the headmaster of Hogwarts who discovered how to kill Voldemort and sends Harry to complete the journey before dying at the hands of Snape (after being fatally cursed though, don't get it twisted. Snape forever ❤).

Before we plunge into the penseive of this specific theory, here's a little context. For a while now people have made parallels to Harry Potter, Severus Snape and Voldemort in relation to the Peverell brothers who, if you remember your Deathly Hallows and The Tale of Three Brothers correctly, each sought an item from Death. The eldest brother, Antioch, requested a wand to make him the most powerful wizard of all time making him Voldemort's equivalent (who desired power above all things).

The third brother, Ignotus, was given a cloak to hide him from Death so that he could live peacefully and ended up greeting death like an old friend (kind of like Harry, who is in possession of such cloak and takes it off to face his death at the hands of Voldemort, sniff).

So with this in mind, what part does Dumbledore have to play? WELL:

Could Dumbledore be Death?! MIND BLOWN. JK Rowling has confirmed that the theory totally fits and she loves it:

Dumbledore as death. It's a beautiful theory and it fits. https://t.co/QqTQm2QnI0

Here are our other 5 favourite Harry Potter fan theories.

1. Harry was an abused child and hallucinated everything as a means of escape

Before finding out he is a wizard and going to Hogwarts, Harry was brought up by the Dursleys who made him live in the cupboard under the stairs and emotionally neglected him. So how crazy is it to consider that Harry may have created an new scenario for him to live in, where he is a famous hero, to escape his terrible daily life? Read this one in much more detail here.

2. 'The Boy Who Lived' title meant something totally different (and sad)

The Tumblr post reads: "There was a part of the prophecy that could have gone a different way: 'either must die at the hands of the other for neither can live if the other survives."

"In the book that means that, in the end, one of them will have to kill the other. What if it meant something else instead?

I'M NOT CRYING YOU'RE CRYING.

3. The Dursleys were so horrible for a good reason

Remember how cranky Ron would get when he was forced to wear the Horcrux locket? Horcruxes have a negative impact wherever they are, bringing out the worst thoughts and feelings a person can have. Since you should all know by now (come on, this might be a spoiler but Deathly Hallows came out EIGHT YEARS AGO), Harry himself was a horcrux, so maybe living with one every day for years is what sent the Dursleys so cranky. Then again, they might just be horrible people.

Ignoring the giant family and the fact that Molly Weasley gave birth to him, a popular theory is that Ron is actually Dumbledore, who time travelled back in time to help Harry. The evidence? They are both redheads in their youth. They're both Gryffindors, huge fans of chocolate frogs and then there's that odd twinkle in Dumbledore's eye that always hints that he knows much more than he's letting on.

This is our all time favourite. Just think about it. Hufflepuff. Huff le puff. Their head of house teaches Herbology for crying out loud. THEY LIVE BY THE KITCHENS FOR MUNCHIE SNACKS. We believe.

Do you think any of these make sense? Tweet us @sofeminineUK!