Niall Horan will soon be overtaking Harry Styles as the ladies’ man of One Direction. The Story Of My Life singer – who has been previously linked with MIC’s Louise Thompson, X Factor’s Tamera Foster and singer Ellie Goulding – took Victoria’s Secret model Barbara Palvin to see The Hunger Games: Catching Fire. This isn’t the first teen heartthrob Barbara’s dated though, as she’s previously been romantically connected to Justin Bieber.

He might be part of the world’s most popular boyband and have millions of pounds in the bank, but Niall Horan is still a normal 20-year-old who takes girls he fancies out on cinema dates.

Except for the fact that his date is in actual fact a stunning Victoria’s Secret model.

This weekend the One Directioner tried to go incognito to the cinema with Hungarian model Barbara Palvin, to see The Hunger Games: Catching Fire at a cinema in Belsize Park, North London.

Supposedly the two lovebirds arrived separately to avoid being spotted together, but onlookers soon recognised the 1D singer, despite his best efforts at trying to blend into the crowd.

A source told The Mirror’s 3am: “Barbara came in first and was playing on her phone until Niall arrived.

“He had a security guard with him, and they sat in the front row so nobody could turn around to see them.

“He kept a baseball cap on and pulled it low, to try to avoid being seen. They clearly wanted to keep a low profile.

“They were laughing and joking together throughout the film, and both were dressed casually. You could tell they were comfortable in each other’s company.” 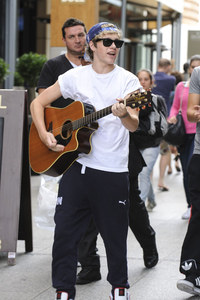 Although Niall was trying to keep from being recognised on his Hunger Games date, Barbara seemed more than keen to let everyone know she was on a date with a fifth of One Direction.

The offending tweet was later removed, but that evening she also wrote, “Spooning is one of the best things,” causing uproar amongst One Direction fans.

One user wrote back to Barbara’s tweet: “We should kidnap Niall so he can’t be with those gorgeous models and other girls.”

Another said: “Why did you tweet this after spending the evening with Niall? Now I’m getting worried.”

Perhaps Niall was trying to be secretive about his date as he’s quickly getting a reputation as a ladies’ man.

The Best Song Ever singer previously dated Ellie Goulding and has been linked both to Made In Chelsea star Louise Thompson and X Factor contestant Tamera Foster.

Meanwhile last year Barbara was engulfed in scandal when it was rumoured that she was spending a lot of time with Justin Bieber, despite the fact that he was still dating Selena Gomez.

Although she denied anything romantic happened with the Biebs, Barbara and Justin were spotted last December at the Lion King on Broadway in New York and photographed at a private house party together.

Do you think Niall and Barbara make a cute couple? Tweet us @sofeminineuk.