It was rumoured that Niall Horan was having a tough time picking between his three current love interests. But by the looks of things one special lady has taken the lead in the race to win the One Direction star’s heart – Victoria’s Secret model Barbara Palvin, who was spotted leaving The X Factor wrap party last night with the blonde Irishman. We think they make such a cute couple!

Someone make sure there are tissues on hand for Made In Chelsea’s Louise Thompson and Irish model Zoe Whelan, as it looks like Niall’s heart has been captured by another woman.

Earlier in the evening Niall and his One Direction bandmates – Harry Styles, Liam Payne, Zayn Malik and Louis Tomlinson – had taken to the stage to kick off the X Factor final with their latest hit Midnight Memories.

Although Niall was happy to introduce his beautiful lady love to his fellow 1D singers and the rest of the people at the wrap party, the pair seemed keen to keep their blossoming relationship hush-hush. 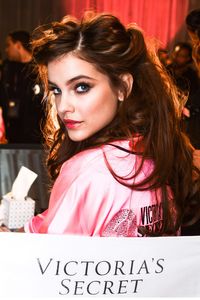 The couple, both 20-years-old, attempted to leave The X Factor wrap party at London’s exclusive Marylebone One club via the back exit, but as always those pesky paparazzi caught them trying to make a hasty getaway together.

Stunning Barbara tried to shield her face with her long hair, whilst Niall kept his head down and refused to smile or acknowledge the cameras.

It’s not known if Hungarian model Barbara - who was once linked to Justin Bieber - will see much of Niall over the Christmas break, as he’s due to go back to his native Ireland to spend the festive period with his family and she will spend the holidays in Budapest.

But it looks like Niall's mum Maura isn’t too keen on her superstar son settling down anytime soon, so it's unlikely Niall will be taking her home to meet the family just yet.

The One Direction mum recently revealed to Ireland's RTE station that she doesn't think her boy is ready for a long-term relationship (sorry Barbara!).

She said: “I don’t think Niall is ready yet for a serious girlfriend. He’s a real happy-go-lucky lad. He wants to enjoy life and isn’t ready to settle into a steady relationship as far as I know just yet.”

As usual the hardworking One Direction boys have a packed schedule lined up for the next few months, going back out on tour in early 2014 to support their new album Midnight Memories, which will make it difficult for Barbara and Niall to see each other regularly.

Speaking about his plans for the New Year, Niall told X Factor host Dermot O'Leary: "We'll be back on tour in April. We go back to South America and we happen to be playing Wembley Stadium."

But for the time being the 1D boys are looking forward to a much-deserved rest over the Christmas break – namely because they’ll get a little space from each other.

On last night’s X Factor Liam Payne joked: “We're absolutely sick of each other, so we won't be with each other.”

Aww we hope you're joking Liam!​

Do you think Barbara and Niall will last? Tweet us @sofeminineUK.