The phone hacking trial involving former News of the World editors Andy Coulson and Rebekah Brooks is well underway, and yesterday Jude Law was called upon to give evidence, resulting in the revelation that Jude had gotten in touch with Daniel Craig to confront him about an alleged affair between him and Jude’s girlfriend at the time, Sienna Miller.

Jude Law was present at the Old Bailey yesterday to give evidence regarding the phone hacking scandal involving the News of the World , and against the accused – Former News of the World editors Rebekah Brooks and Andy Coulson.

The 41-year-old told the jury that the press had a bizarre amount of information on his life, and so it was hardly surprising when it was revealed a close family member of the actor had been leaking information to the newspaper for money. 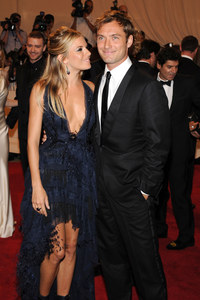 He said: “There seemed to be an unhealthy amount of information that people, or someone, had, that meant they had access to my life and my whereabouts.

“I was aware later about 2011, maybe later than that, at the time I was approached about the case that the News of the World had been in contact with people in my family, trying to find things out, asking for quotes.”

It appears The News of the World published a story claiming that Sienna Miller was having an affair with Casino Royal actor Daniel Craig after Jude Law telephoned him to confront him.

The barrister asked: “Did you make any reference to his [Craig’s] then-girlfriend, somebody called Satsuki?”

Jude replied: “I do not remember if that was her name – Saski – more than likely, yes. We had known each other for many, many years so the conversation took on all sorts of turns.”

So who betrayed Jude’s confidence by spilling this information? Apparently the defence wrote down a name to show the actor, who replied: “I was made aware very recently that there had been some kind of communication with this person and several others in and around and about this period of time. I was never aware any money had been exchanged.”

Poor Jude Law! He isn’t the only celeb to have been the victim of phone hacking, as Kate Middleton’s voicemail was also apparently hacked, and was used in the trial against the accused in which it was revealed that William calls Kate “babykins.” Giggle.

What do you think about the phone hacking scandal? Tweet us @sofeminineUK