Cressida Bonas might be fabulously rich and posh, enough so to have snagged herself a prince, but she admittedly tends to dress like she has just stumbled out of bed and stuck on the first pair of dungarees and scrunchie she could find. Apparently this way of dressing could become a problem in case she ever does get engaged to Prince Harry, and the Royal Family reportedly want to do some serious style revamping. They can’t just let any old Topshop-wearing commoner in!

If Prince Harry is ever going to get on one knee, apparently his girlfriend Cressida Bonas needs some serious restyling, something Harry is not at all happy about.

According to Now magazine, since Cressida is known for doing most of her shopping via ASOS and Topshop, appearing at festivals and on nights out looking fairly homeless (but trendy), the Palace officials are determined to crush her boho style so she looks right for the part, because apparently they are “aghast” by her style.

Say goodbye to the scrunchie and hello to a fascinator Cressie, because this isn’t going to be pretty!

An insider told the magazine: “Cressida’s style doesn’t sit well with the Palace old guard, who fear she’ll lower the tone of the monarchy with her quirky dress sense. They agree she can be incredibly stylish on occasion, but a lot of the time she looks like she’s just stumbled out of bed.”

And since Kate Middleton has done so well blending into the Monarchy, they allegedly want to do the same with the 25-year-old PA.

The source continued: “Kate’s been such a hit since she joined the Royal Family that they want Cressida to be a blonde clone of her.”

Argh, no! We love Kate, but we don’t need two of them! Inject some originality into your lives, Royal Family!
​
However, sources say that Cress is more than willing to be restyled and to undergo speech training in case she has any royal duties just to keep the peace…something her BF is not pleased about.

The 29-year-old is reportedly annoyed at his family prodding at his girlfriend’s fashion sense and is on the warpath to defend her.

​The source said: "Harry’s terrified that Cressida will be a totally different person in a year or two if the Palace gets hold of her and transform her – he fears he’ll wake up one day and realise she’s not the girl he fell for."

“Harry adores Kate, but Cress is her own person. He’s furious and has made it clear he’s not going to ask her to change for anyone.”

You tell them Harry! What a man.

Do you think Cressy should sort out her style? Tweet us @Sofeminineuk 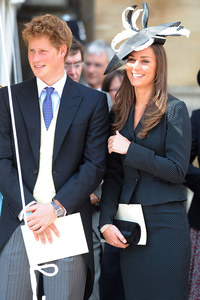