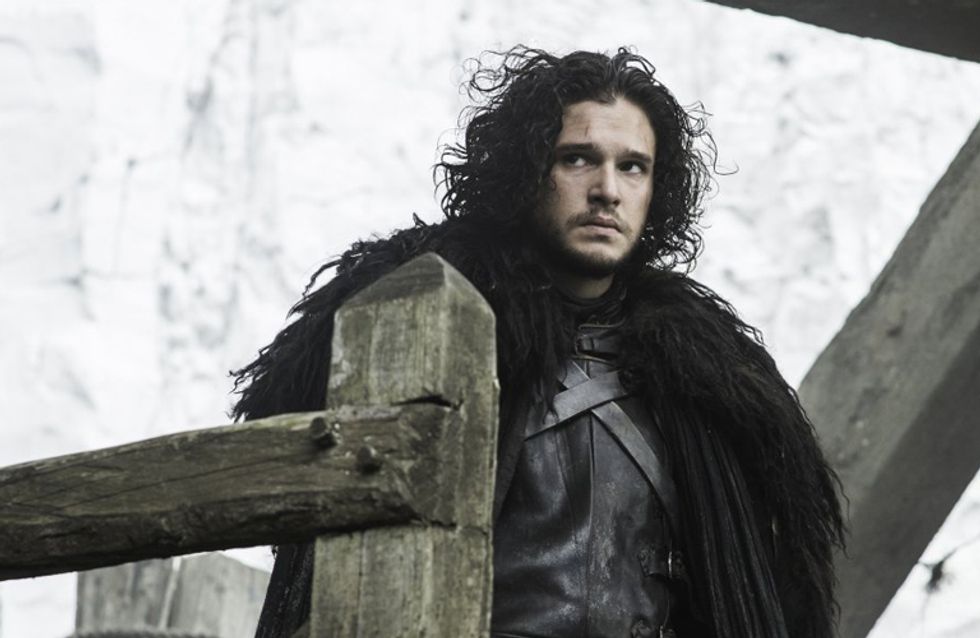 Guys, guys, GUYS. Stop what you're doing and listen because it looks like a popular Game of Thrones theory may or may not be definitely happening and we need to discuss it AT ONCE. For everyone who does not want GoT to be spoiled by theories, turn away now. For everyone else, here's why it looks like the popular R+L=J theory is HAPPENING.

Before we examine the truly delightful evidence that suggests the theory will come true, we should explain what it is first. R+L=J is the popular theory among book readers that Jon Snow is not the bastard of Ned Stark, as we have been told, but the son of Ned's sister Lyanna, with Prince Rhaegar Targaryen, Daenerys's older brother who was killed during Robert Baratheon's rebellion.

Lyanna was thought to be kidnapped by Rhaegar, which sparked the rebellion in the first place, and when Ned finally finds her in the Tower of Joy, she is said to be dying in "a bed of blood", and said "promise me Ned", before she died.

The theory is that Lyanna made Ned promise not to reveal the parentage of her newborn child, Jon, as she knew he would be in danger from Robert Baratheon who ordered the deaths of every Targaryen after claiming the throne.

​ That explains why Ned returns to his wife with a bastard child, when he is often described as a man of honour. The TV show has made mention to Lyanna and Rhaegar several times through the five-season run, and even Stannis seems to suggest that Jon may not be Ned's son when his wife calls him a bastard and Stannis replies: "Perhaps. But that wasn't Ned Stark's way."

GIVE US THE EVIDENCE!

So, why do we reckon this theory is going to be proven true in season 6? HBO announced new filming locations earlier this week, with one being Castillo de Zafra in Guadalajara, Spain. Nothing unusual, it could be any old castle, right? Maybe it is being used as a new location of Dorne or maybe we will finally be visiting Casterley Rock? Thing is, it looks like THIS:

Knowing that Lyanna is found by Ned in the Tower of Joy, this seems like the best possible explanation for the new location. But wait! There's more!

When you look at new casting calls for season 6, HBO is apparently looking for a character without a name, but labelled as a 'Legendary Fighter'. According to Winteriscoming.net, the character should be around his thirties or forties and is described as: “a paragon of knighthood. The theory is that this COULD be Ser Arthur Dayne, a brilliant fighter known as 'The Sword in the Morning'. And why is this so important? Only that Ser Arthur Dayne was AT THE TOWER WHEN NED FOUND LYANNA.

We sense a flashback in season 6. We sense a flashback and we are so excited. All we need now is for Sean Bean to appear on set with little dots on his face so they can CGI him to look younger and it'll be all but confirmed! The character could also be Howland Reed, Jojen and Meera's father (ya know, the weird ones helping Bran get to the three-eyed raven), who was also at the Tower, and the only man still alive who would know Jon Snow's true parentage. Freaking. Out.

What this means for Jon Snow...

Of course, this would mean that Jon Snow would have to be alive to become Jon Targaryen, take his place on the Iron Throne and make us all sob tears of unbridled joy, so we're guessing that, what with Melisandre's presence at Castle Black and the fact that Kit Harington is yet to cut his hair, Jon Snow will be reappearing come season 6. He has to. He just has to.

Do you think this means R+L=J is happening? Tweet us @sofeminineUK!

QUIZ: Which Sense8 Character Are You?