The adorable scene stealing puppy from The Artist has been put down after suffering from a prostrate tumour. According to TMZ, poor old Uggy died on Friday at the age of 13. We're not okay right now.

Uggy was best known for playing Jack, the dog from The Artist who wowed audiences with his amazing skills and led him to win the Palm Dog Award at the Cannes Film Festival and Best Dog in a Theatrical Film award for Dog News Daily. He is also the only dog ever to imprint his paws on the Hollywood Walk of Fame.

If you haven't seen The Artist (or Water for Elephants, where he's also amazing) and have no idea why we're treating a dog like Meryl Streep, check out his skills. He was the Meryl Streep of the canine world.

Uggie's owner, animal trainer Omar Von Muller, adopted Uggie before he was sent to the pound after being rejected from his first two families. He said that the decision to put Uggie down was "difficult", and that his training had little to do with Uggie's crazy good performances. He said: "Everybody thinks I am a great trainer. I don't think so. I think he is just a great dog."

Another of Uggie's trainers, Sarah Clifford, also sent out a tribute saying he was: "a perfect little terrier."

She also said: "I will forever hold him dearly in my heart and never forget his infinite love for chicken and hotdogs."

We think writer Marc Snetiker sums it up best:

RIP Uggie you were too good for this world 🐶 pic.twitter.com/RkiEofbfwg

RIP Uggie! Did you love him in The Artist? Tweet us @sofeminineUK and remember the good times: 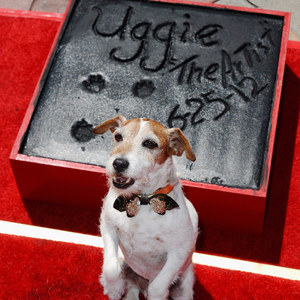 14 Redheaded Celebs Who Made Being Ginger Cool