Taylor Swift is well known for her long curly blonde hair that she swishes about an awful lot like a rock star as she sings sweet country songs about boys who should be with her and laugh at her jokes and never leave her etc etc. However, it looks like she has now lost a vital show prop as the pop princess has posted a snap of her on Instagram sporting a new bob-style cut. Is that hair dye we spy too TayTay? Or is it just the lighting? Either way, it looks great!

Taylor Swift has had her trademark long blonde hair cut – so everyone trying to imitate her perfection should better book a hair appointment, stat!

The You Belong With Me singer has marked the end of the European leg of the Red world tour by cutting the signature blonde locks into a neat bob. 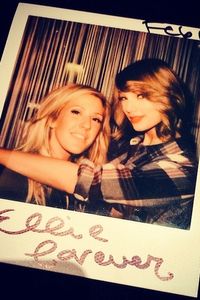 The 24-year-old singer posted her new look on Instagram in a snap which shows her hugging Ellie Goulding along with the caption: “London, I could never thank you enough! See you next time! PS. Short hair, don’t care!!!”

Shealso posted a video just before she went in for the cut, filming the franky absurd amount of people that were egging her on to get a hair cut, saying: “This is how many people are watching me get a haircut right now. We don’t do anything without an audience, do we?”

Her neat new bob isn’t quite as radical as when Miley Cyrus hopped into the hairdressers chair and radically changed her image, but it doesn’t sound like Taylor is too interested in ‘pulling a Miley’ regarding her wholesome, sweet image. She told Glamour magazine she had no plans to start doing nudity, saying: “I find it relatively easy to keep my clothes on because I don’t really feel like taking them off.

“It’s not an urge I have. For me ‘risky’ is revealing what really happened in my life through music. Risky is writing confessional songs and telling the true story about a person with enough details so everyone knows who that person is. That’s putting myself out there, maybe even more than taking my shirt off.”

Does this mean her next album is going to have some juicy Harry numbers? Fingers crossed!