The 10 Best Moments From The Mad Men Season 7 Premiere

by the editorial team Published on 14 April 2014 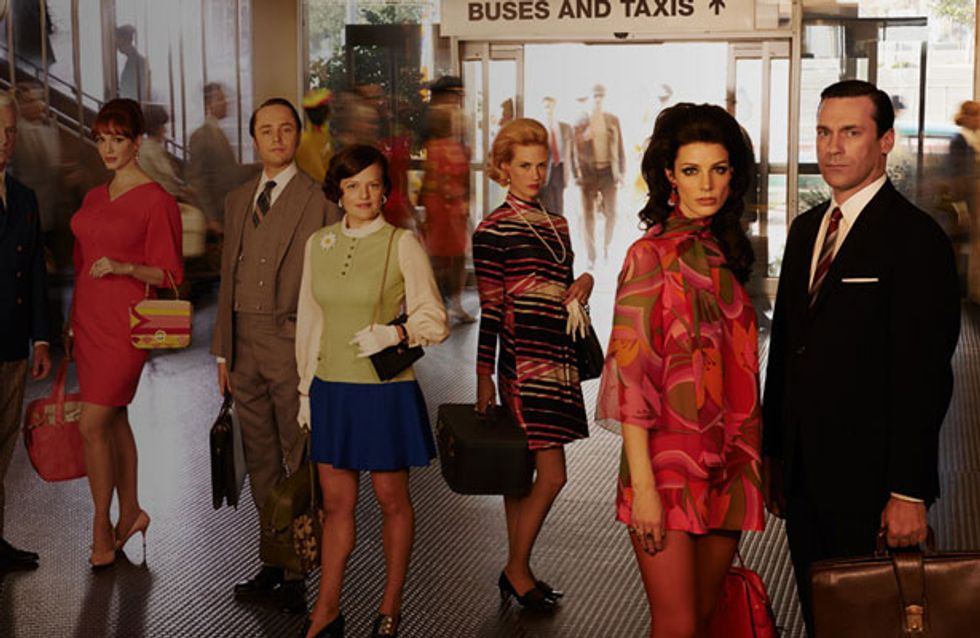 SPOILERS AHEAD! Last night, the much-anticipated season 7 premiere of Mad Men finally premiered. In typical Mad Men fashion, the episode left us bewildered, beguiled, and wanting so much more. Here are our 10 favorite moments.

10. Last season ended with a lot of room for interpretation, and left us wondering about a number of severed relationships. At the top of the list was, "Are Don and Megan still together?" and indeed they are. Megan pulls up to LAX in a zippy little convertible, greeting Don, who'd just arrived, with a passionate kiss before they drive off.

9. We get to see Megan's new digs out west - an amazing bungalow with an incredible view of the valley. In a rare humorous moment, Don likens it to "Dracula's castle" and suggests she move somewhere a bit more populated.

8. Joan goes toe-to-toe with the new director of marketing at Butler Shoes, a snot-nosed MBA grad who is threatening to pull the plug on his company's advertising budget. Ever the smart and savvy gal, Joan assures she is one step ahead of him, buying her a little bit of time to save the account.

7. Seems like Roger has found a new lifestyle - one in which more than two people sleep in the same bed. What's going on, Rog?

6. Pete Campbell looks like an absolute tool in his bermuda shorts, but his sunnier disposition upon seeing Don for the first time in months proves that California agrees with him. His cheerful attitude wanes quickly when his new blonde bombshell girlfriend flirts with Don. (We don't blame her.)

5. Ted Chaough, back from LA for a visit, receives an icy reception from Peggy when they bump into one another in the break room. (And frankly, we don't blame her either.)

4. Our heart broke for poor Peggy later on, when she falls to her apartment floor in sobs after being ignored at work and bothered by her tenants.

3. Several exchanges between Don and Megan point to the fact that she has no idea Don's been out of work the past few months. Can't wait to see how that ends up!

2. Don cozies up to his beautiful seatmate on the plane back to New York, but ultimately shoots down her advances when she invites him back to her place. Wait a sec. Is Don Draper attempting to be... monogamous?

1. The best moment of all was the very last shot, a forlorn Don Draper sitting on his Manhattan balcony after failing to get the sliding doors, which are stuck, to close. What does this mean? Was this an ode to the show's famous intro credits, which feature a cartoon man falling slowly from top of a high-rise building? Talk about an ominous sign! The perfect beginning to the end of this ever-twisting tale.

Are you excited for the final season of Mad Men? What do you think will happen next week? And where the heck is Sally?! Tweet us @sofeminineUK!