The Best Moments From The MTV Movie Awards 2014

by Emmy Griffiths Published on 14 April 2014 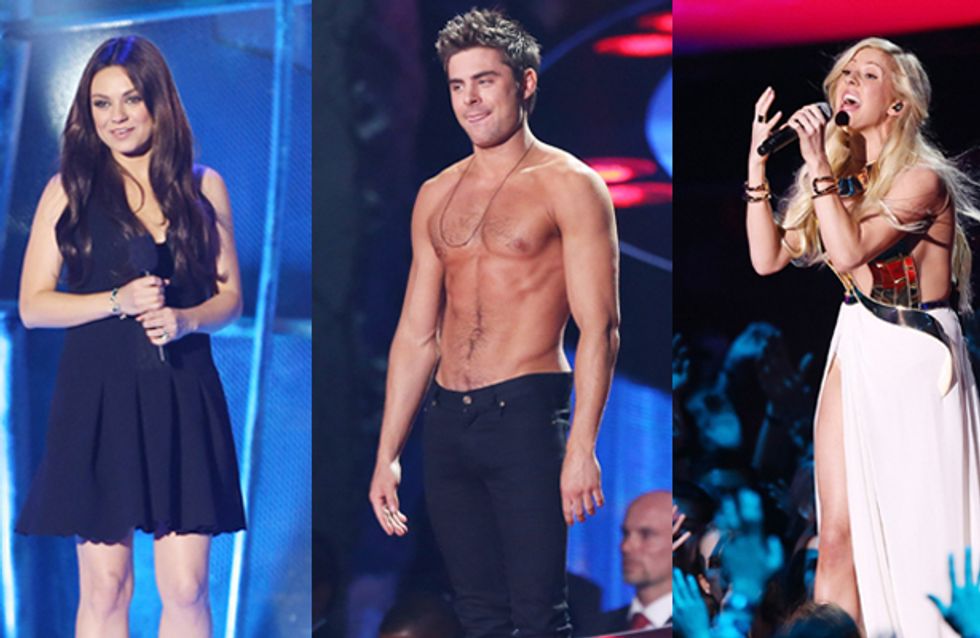 The MTV Movie Awards hit our screens last night, and since this show is notorious for it's playful attitude (and Blockbusters winning every award, obviously), we always look forward to watching it, and this year did not disappoint! Highlights included Seth Rogan making out with his mother, Mila Kunis's sweet little baby bump and, of course, a shirtless Zac Efron...

Mila Kunis looked glowing and sported a little baby bump as she accepted the Best Villain award for her performance in Oz: The Great And Powerful.

Zac Efron presented an award shirtless and we passed out

We got to see an Amazing Spider-Man 2 clip

And X-Men: Days of Future Past clip! Nerd heaven!

Conan O’Brien did a skit 50 celebrities for his opening segment!

The highlight was when he asked Taylor Swift if she “wanted to go for a walk on the beach or just hang out” as they had their nails done. Other cameos included Lupita Nyong’O, Adam Sandler and Jessica Alba. Amazing.

She blamed it on her contacts but it was funny, especially when her co-host Seth MacFarlene commented: “Well this is going as well as the Oscars” (referencing his dire hosting skills).

Dave Franco, Zac Efron and Seth Rogan promised to smooch any girl who found a golden ticket under their seat. Unfortunately for Seth, the golden ticket holder was his ‘mother’, so he dutifully made out with her!

Ellie Goulding performed Beating Heart and it was awesome

THE BACKSTREET BOYS WON SOMETHING

It was for their cameo appearance in This Is The End, and won them Best Musical Moment.

Did you watch the awards show? What was your favourite moment? Tweet us @sofeminineUK