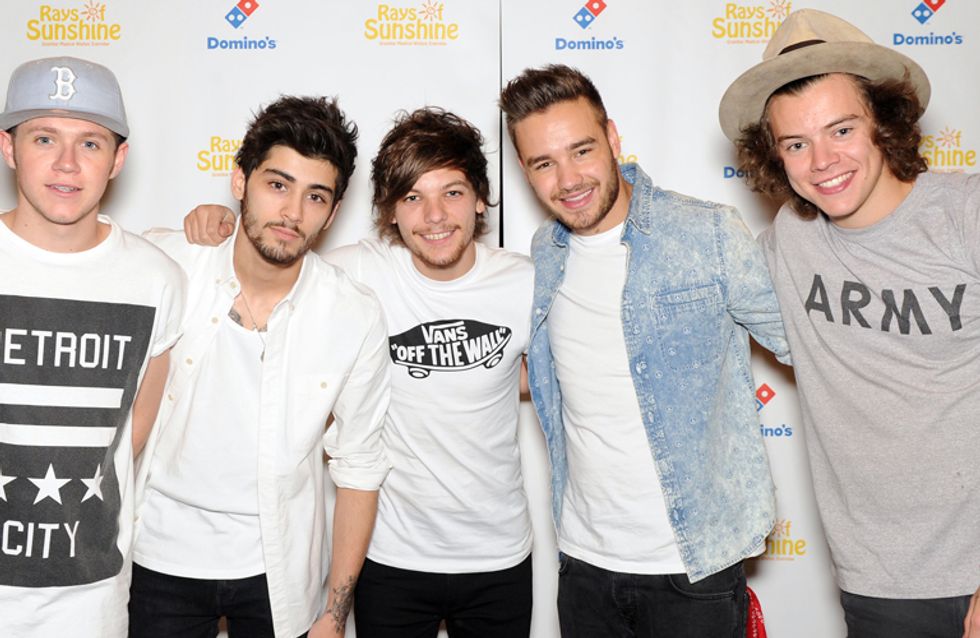 Oh 1D, you cheeky yet handsome scallywags you. Since coming up third in The X Factor (and subsequently becoming the biggest boy band the world has ever seen blah blah blah), the boys have gotten themselves into trouble plenty of times; as any teenagers with more money than sense are bound to do. Here are our favourite 'uh oh' moments from our favourite boys...

Oh WOW. That friendship was over quickly. Really, really quickly.

@NaughtyBoyMusic you fat joke stop pretending we're friends no one knows you .

The Twittersphere pretty much exploded when Harry favourited a photo of some, erm, fairly goopy fingers with the caption: "Oops. RETWEET if you'd lick me clean."

Louis and Zayn had a bit of a row when Zayn began producing music with producer Naughty Boy, who proudly uploaded a funky neon photo of the pair of them which Louis promptly dissed, saying: "remember when you were 12 and you used to think those Mac filters for your pictures were cool haha! Some people still do HA!"

4. When Niall said something TRES offensive about his female fans

He arrived at Dublin airport and apparently sayd: 'Remember the last time I walked out here? You shower of c****.' Although his fans quickly defended him, saying it was all banter and hey, in Ireland it's basically a term of endearment. Niall still apologised, saying: "Really sorry if I caused any offence. It was just banter with fans who I think of more as mates. But I understand that it's not a word I should be using at all."

It has been confirmed that Louis Tomlinson is indeed expecting a child with LA stylist Briana Jungwirth, whom he had briefly dated earlier in the year. Needless to say the unplanned pregnancy has received a lot of attention, although Louis has claimed he's "buzzing" about becoming a dad so we're happy for him!

6. When Louis said the N word.

It was in the same video where he and Louis were smoking weed and getting excited about 'chicken in Chile', so this was a double whammy of UH OH.

"So here we are, leaving Peru. Join lit, happy days! [...] A very important part of Zayn's warm up is Mary J herself." Oh Louis, why would you film this? Just keep your drug habits private! They also say something about 'chicken in Chile', chicken apparently could mean a kilo of cocaine. Either that or they're all just really excited about their dinner reservations.

8. When Zayn apparently broke up with fiancée Perrie Edwards via text message

According to recent reports, Zayn broke up with his fiancee of two years over text. A source told The Sun: “It’s unbelievable, he’s an immature little boy with no thought for anyone else’s feelings. Perrie is one of the sweetest girls in the world and she's stood by him through thick and thin. But he ended their engagement with one text message and in the two weeks since there’s been complete radio silence between them.”

9. When Louis drunkenly yelled that he was gay

The band's notoriously disliked each other (before 1D won and The Wanted broke up, lulz). Zayn, Liam and Louis seemed to particularly dislike Max George, Jay McGuinness and Tom Parker, and the group had PLENTY of spats, namely joking about each other's rise to fame. Their girlfriend's even get involved!

11. When Liam stood on the edge of a huge building

The silly boy stood on the edge of a high rise hotel and posted the picture online, having his friends freak the F out about his safety and wellbeing. To be fair, it was a really foolish thing to do. What if there was a gust of wind and you had fallen in the wrong direction Liam?!

12. When Zayn left the band and everyone was like OMG

His reason for quitting was: "My life with One Direction has been more than I could ever have imagined. But, after five years, I feel like it is now the right time for me to leave the band. I'd like to apologise to the fans if I've let anyone down, but I have to do what feels right in my heart. I am leaving because I want to be a normal 22-year-old who is able to relax and have some private time out of the spotlight."

A week later he was recording with Naughty Boy. Ummm...

13. When Harry Styles may or may not have said he was gay and sent fans into meltdown mode

When asked what the boys look for in a partner, Liam suggested "female" to which Harry responded: "not that important." GASP.

14. When Liam was a big ole' idiot at the Empire State Building

After a visit to the New York City attraction, Liam complained that the security were rude to him and his family. However, the Empire State Building Twitter hit back, tweeting: "@Real_Liam_Payne: Bad behaviour not accepted at ESB. No, our security does not know who you are, and does not care."

Ouch! Liam tried to smooth things over quickly, saying: "I would like to formally apologise to the Empire State Building security team and its owners for our misunderstanding the other night...I didn't mean to cause anyone any problems and hope that I can come back again for a visit again in the future

15. When Harry went out with Caroline Flack

The 14-year age gap between then 17-year-old Harry and 31-year-old Caroline Flack kind of gave everyone the creeps.

What do you think they'll get up to next? Tweet us @sofeminineUK!

The Real Reason Zayn Malik Left One Direction Has Been Revealed