Home / Entertainment / News celebrities / "The World's Getting Kinky!" What We Learned Chatting To The Cast Of Kinky Boots

"The World's Getting Kinky!" What We Learned Chatting To The Cast Of Kinky Boots 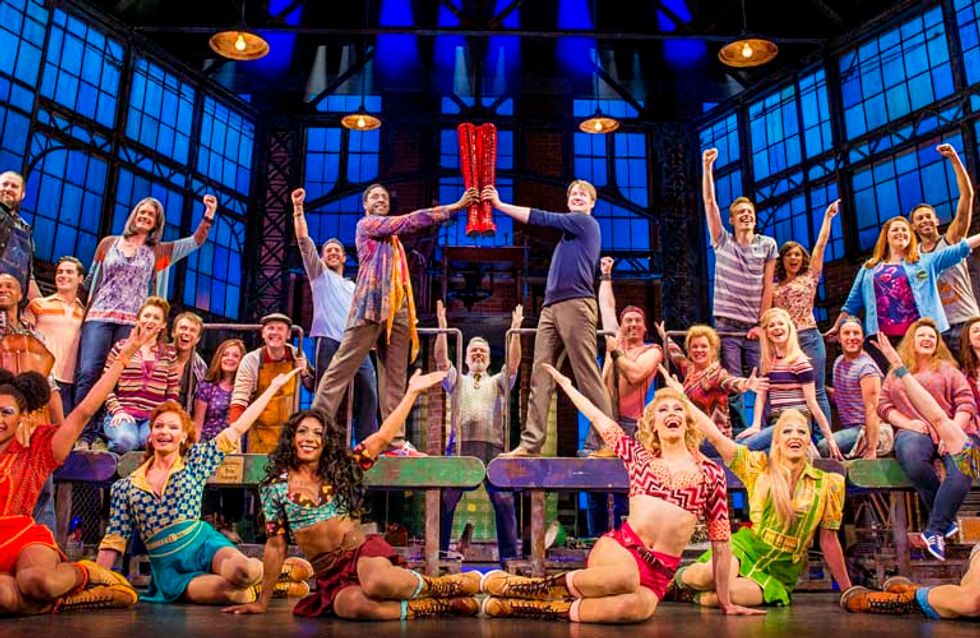 Kinky Boots is a smash hit on Broadway, winning SIX Tony awards (including Best Musical) and has FINALLY come to London's West End. If you are a fan of musicals, comedy or happiness in general, this definitely is NOT one to miss. After watching the show, we at SoFeminine chatted to 80's icon Cyndi Lauper, who wrote the music, show writer Harvey Wiernsten and the show's lead Killian Donnelly to find out more about the show that is guaranteed to take the West End by storm...

1. The atmosphere is incredible

Not that we didn't already know this from cheering at the end of every song and jumping up for the standing ovation, but even Killian Donnelly, who plays the main character Charlie Price in the musical, said the show had an atmosphere which he's never felt before. He said: "I went along to the show on Broadway and loved it. I was blown away by the atmosphere. I went on a Wednesday matinee and it was raining but the atmosphere in the building was amazing.

"If you’re having a bad day it’s a show that will change you. It’s very cliché for people to go ‘oh it'll make you happy’ or ‘it’s a feel good show’, but there’s something very happy about Kinky Boots where it is inspired by a true story and it will affect people."

2. Cyndi loved not having to focus on her own ‘sound’

This is Cyndi's first musical and she has already become the first solo woman to win a Tony Award for Best Original Score, and apparently she loved being able to write in all of different voices rather than just her own. She said: "[Harvey] kept saying 'there are no rules' and I was like 'no rules?' nobody's gonna tell me: 'you can't sing like that you're Cyndi Lauper.' Well now it's not even me! It's Lola. And what would Charlie sing like? And what would Lola sing like?...I didn't have to sound like Cyndi Lauper for once!"

Harvey chimed in, saying: "To all the children out there watching: if you wanna write a big West End hit musical, watch a lot of cartoons!"

Hilarious. When asked about whether she and Harvey were nervous about bringing the show to the West End, Cyndi said: "I was nervous because it's a story about England but then a friend of mine...Graham Norton said 'the show's coming home' and I realised 'yeah it is coming home, this is where it originated this is the real story. In fact the real guy from the shoe factory was actually in our audience one night watching."

We Brits know that we don't get enthusiastic about much, and basically only show affection to our pets and alcohol. So we think that a standing ovation in the West End is MUCH harder than on Broadway.

Killian said: “The thing I’ve liked most is that there’s Broadway and then there’s the West End. It’s all down to our audiences because Broadway will applaud talent…but here we’ve paid £60. Entertain us. So when you get a standing ovation here you feel like you’ve earned it."

6. Husbands will love it

This isn't a show just for the girls, at ALL. Killian said: "I think it really touches young and old where the husband will be dragged to it and by the end it’s the husband saying ‘I loved I thought it was brilliant’...it’s just the message; just be who you want to be, it really comes across."

The Broadway cast recording is all well and good, but we want to binge listen to THIS cast! Killian agreed, saying: “I’d love to do a Kinky Boots recording. I think the fans would go mad for it. I’m pushing for it.”

8. The treadmill dance is a nightmare

All you need to know is this: there is a treadmill dance and although it looks amazing, we would also be absolutely terrified to try it out ourselves. It's like watching Total Wipeout. Killian agreed, calling it the hardest thing to do in the musical. He said: "The treadmill dance - health and safety nightmare. I have so many bruises."

"I did the whole scene and I’m singing this song like “where is my love” and everyone’s laughing and I was like ‘why is everybody laughing?’"

10. The world's getting kinky!

It's not just coming to London! Lucky for planet Earth, there's no stopping Kinky Boots. Harvey said: “We have to start casting the Australian company. Kinky Boots is currently on Broadway, in Toronto, on tour in America, in Seoul, the company opening here…the next one is actually in China.”

As Cyndi said: "The whole world’s getting kinky!” Are you planning on watching the show? Tweet us @sofeminineUK with the hashtag #LondonGetsKinky!