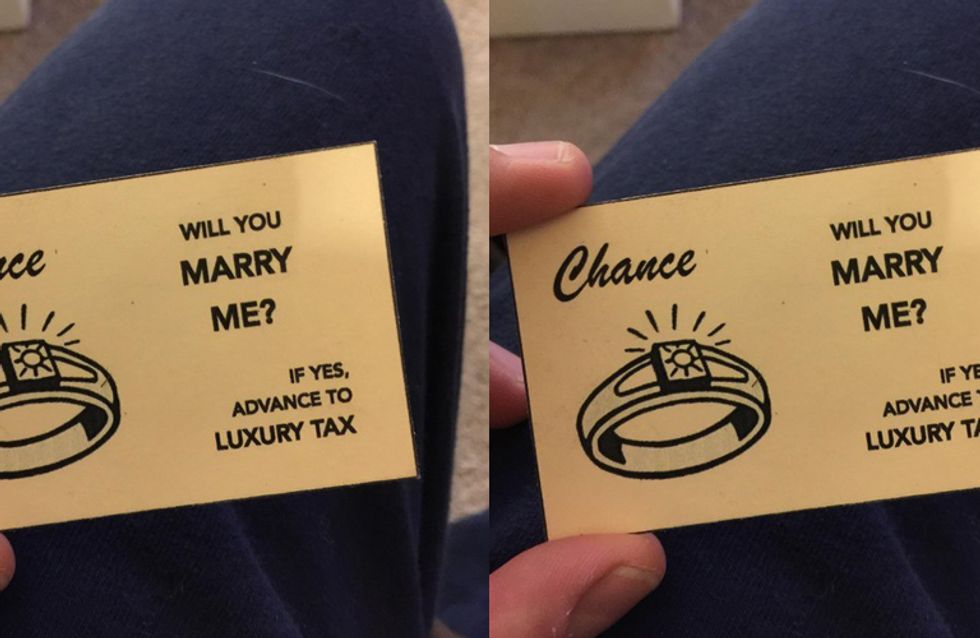 Although Monopoly usually makes us feel generally disappointed, cheated and enraged, this one has made us feel all warm and fuzzy inside! Creative genius Justin Lebon decided to propose to his girlfriend using a homemade board, and forget dancing proposals, this HAS to be the most romantic thing we've ever seen!

With the help of his woodworking pal Mark Becker, the husband-to-be got to work proposing to his wife by creating their very own Monopoly board, with the places all based on what was meaningful to them. From Match.com (where we can only assume they met) to 'Home Sweet Home', the most expensive property on the board, Justin thought of everything!

Michel, Justin's girlfriend, claimed to know something was going on, but not quite what it is. Justin told Buzzfeed: "She knew Mark was helping me, so she figured her gift was going to be really cool, but she thought it was going to be a world travel-themed board.”

“When she opened it up and saw that it was about us, she was like, ‘No f**king way.’ I gave her the whole tour of the board and by the end, we were both crying.”

In fact, Justin was so excited to show her the board that Michel didn't think he was proposing at all, and that it was actually just a lavish gift. He said: “By the end, she didn’t think a proposal was coming. She had the dice in her hand the whole time, and when I finally suggested that we play, she rolled a seven.”

What he actually had planned was this: the ring was hidden in a secret compartment under the 'Chance' square, and Justin had rigged the dice so Michel rolled a 7 and landed on it. Since landing on 'Chance' involves picking up a card, Justin had his propose well and truly prepared by planting this:

CUTE RIGHT?! ​Justin was ready on one knee, and pushed a key into the board game which revealed a trap door in which the ring was hidden.

Is this the best proposal you've ever seen?! Tweet us @sofeminineUK!

This Man Sobbing After Watching Titanic Is All Of Us