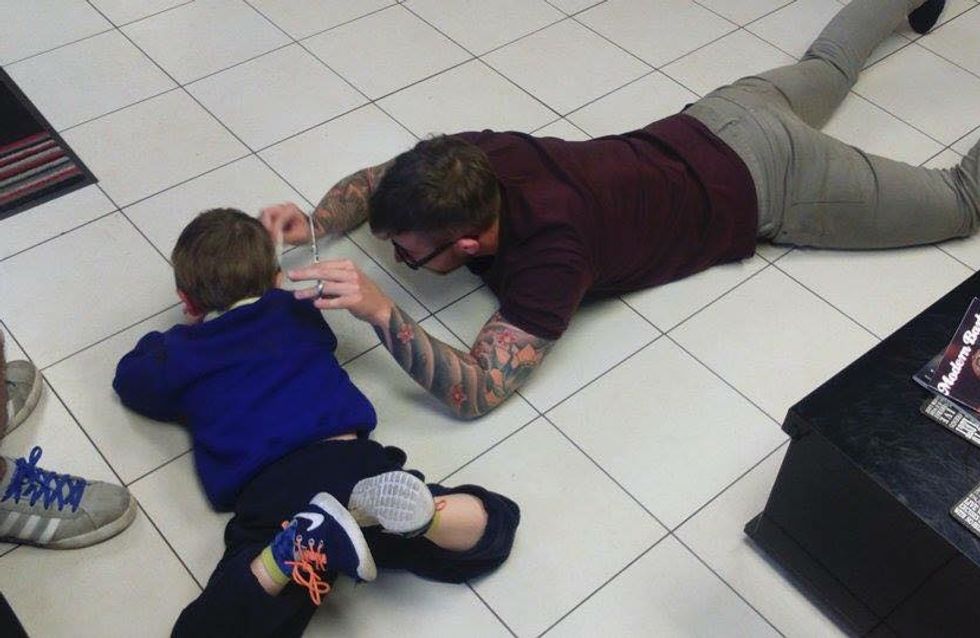 After an incident during a haircut two-and-a-half years ago had made Mason terrified of barber's chairs, his mum ended up taking him to a barber she had heard was good with children who dealt the the problem in the most ingenious way...

For Mason, the idea of getting his hair cut was a terrifying one and would cry and be unable to sit still while it the barber's seat, making tidying up his tresses a near-impossible job. After his mother became frustrated with his hair looking increasing untidy, she took him to James Williams who slowly built up a relationship with Mason over several months before finally being able to cut his hair.

Williams said: "Over the past months I have been trying to find different ways Masons hair cut. He wouldn't allow me to go near one of his ears - he would run away on times if he wasn't up to it."

​Little Mason, who was diagnosed with autism only a few months ago, let James cut his hair while he lay on the floor and played on his mum's phone.

James said: "Today I finally achieved it where we both lay on the floor in silence...he allowed me to cut away and give him his first proper haircut, again achieving something in a job I love making both parents happy by giving extra attention to mason by building a friendship at trust with Mason & myself (sic)."

The best part of it? After James finished cutting Mason's hair, he said: "what gave the finishing touch was that I asked for a high five and he hugged me (sic)." NAW.

Mason's mother Denine told The Mirror: "I can't believe what James did - most barbers would be eager to get on to their next customer as they would be losing money but he didn't mind at all and dedicate all his attention on helping Mason. People don't realise how difficult it can be for a child with ASD and how much it means to parents like me and Jamie. This was the first proper hair cut he has had since he was 18 months old."

"Seeing Mason get stressed and upset is so traumatic so when James did this it meant the world."

Someone give the man a medal please! What do you think? Tweet us @sofeminineUK!