Top 7 Moments From Game of Thrones Season 4 Episode 6: The Laws of Gods And Men 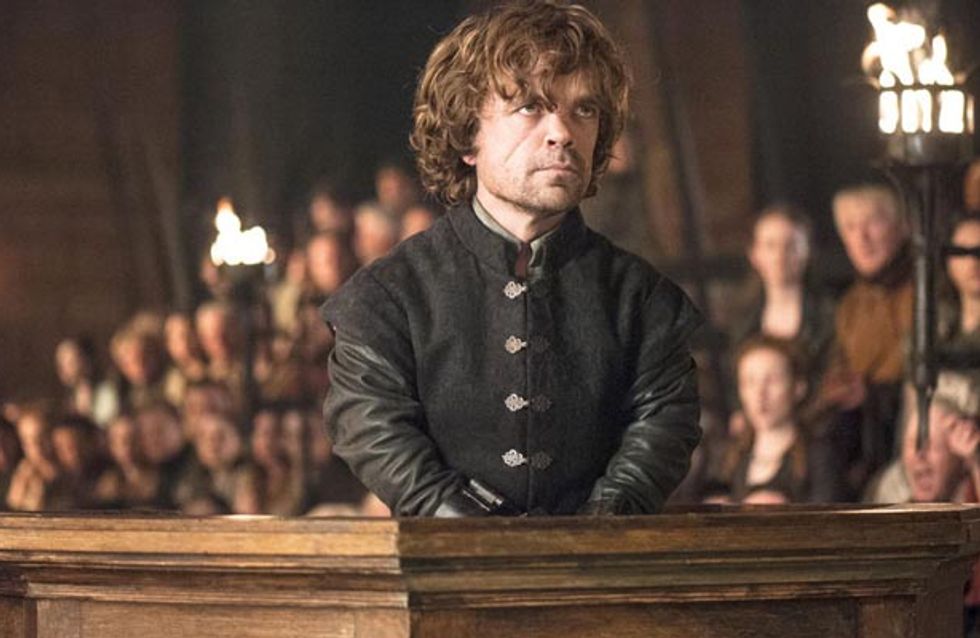 Game of Thrones. Why do you play with our emotions the way you do? You know we hate it, and since Tyrion's trial is curiously reminiscent of Ned's arrest back in season 1 (corruption, false promises, a fan favourite on the way to the chopping block etc), it is making it look all the more likely that our darling Imp is on his way out of the show missing exactly one head. Still, keeps things intense, doesn't it?! Let's recap our favourite moments from The Laws of Gods and Men...

We saw Davos’s little finger stubs, at last! The moment we've all been waiting for! He did a pretty awesome speech there as well. Very convincing.

Also, did anyone else feel absolute nerd joy at seeing Mark Gatiss as a Braavosi banker?!

Davos was all "talk to the severed hand because the face ain't listening." #GameOfThrones

Davos Seaworth just dropped the mic, y'all, and not because he's missing some fingers. #GameofThrones

Poor Yara Greyjoy failed in retrieving her brother, mainly because he now thinks he’s a smelly servant called Reek and is possibly the most pathetic character GoT has ever seen.

Does anyone still hold a grudge for him taking Winterfell and killing those children now? Because frankly we're feeling sorry for the guy, even if he was rewarded with a bath.

Every scene in #GameOfThrones with Theon Greyjoy is just super depressing.

Theon Greyjoy is turning into Gollum. Can someone please put that poor kid out of his misery? #GameOfThrones

Dany finds ruling as dull as we find watching her rule

Dany’s dragons ate some goats and she paid the man back YAWN SAIL TO WESTEROS ALREADY.

After a little chat with Oberyn, we find out that Varys has no interest in men or women. Since plenty of the questionable actions of characters in GoT are because of lust, this is most interesting.

Is Varys going to end up on the throne whilst everyone else gets screwed?

The absence of desire leaves one free to pursue other things. Varys vs Baelish 2016.

Did we just learn Varys wants to be King?? Or am I buggin?? #GameOfThrones

Not gonna lie I thought Varys was into men too. #GameOfThrones #DemThrones

The Trial AKA Tyrion’s Greatest Hits

Onto the main event! Tyrion’s trial was basically a chorus of people intent on humiliating him. It wasn’t pretty, and yet we were still delighted to hear some of his gems from the past. E.g. “He called our King our half-wit.” Bahaha.

I knew I felt deep unyielding dislike for Shae for good reason. Watching her testify against Tyrion was just horrendous to watch. If we wanted to feel so sorry for someone that we cry, we'd watch Edward Scissorhands. Just his "Shae, please don't." Ugh, feelings.

I cannot believe Shae up and betrayed Tyrion like that. So not cool. #GameofThrones

So it’s agreed? Peter Dinklage is winning another Emmy for this performance? Excellent.

If Tyrion Lannister isn't your favorite character on television, you're probably one of those "I don't own a TV" people. Gross.

Tyrion fans after the episode... pic.twitter.com/ywCYSdeaNh

What are the Greyjoys’ next move without Theon?

Who will be fighting for Tyrion in his nice trial by combat?

What did you think of Peter Dinklage’s performance?

It's getting so good! Check out next week's episode promo below and tweet us what you thought of The Laws of Gods and Men @sofeminineUK