Victoria Beckham admits she was unhappy with the Spice Girls Reunion

Apparently Victoria Beckham did not want to spice up her life during the Spice Girls Reunion tour a few years ago and at the 2012 summer Olympics, admitting that her heart wasn’t really in it. Now a swanky and successful fashion designer, mother-of-four and wife of David Beckham, it seems like Posh wanted the good old days of sparkly dresses and giant platforms to remain in the past. We glad she’s kept her pout though – some things should never end!

Victoria Beckham has revealed that she didn’t enjoy the Spice Girls reunion tour and that she “just wanted to be elsewhere.”

The Spice Girls - Mel B, Mel C, Emma Bunton, Geri Halliwell and Victoria - have been named as one of the most successful British bands since the Beatles.

The female fab five ​decided to have a reunion tour in 2007 which apparently sold out in 38 seconds, though now it appears that Posh was less excited about the comeback tour than her legions of fans. 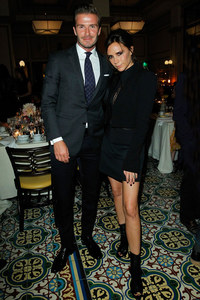 Opening up to Vogue Paris, Victoria said: “I realised it was finished for good in 2008, when we reformed for our reunion tour.

"It should have been the best moment of my life, but I just wanted to be elsewhere.”

She also claimed that it wasn’t because of any problems with her fellow spice girls, admitting: “It wasn't a lack of respect for the girls or the audience, but the passion just wasn't there.

"By contrast, in my new career, the passion grows every year. I still want more.”

We suppose when you become a highly successful fashion designer you’d prefer your silly old days of trying to decide which black mini dress to wear (a throwback to Spice World there, arguably one of the greatest films of our time) in the past.

​However, this didn’t stop Victoria from joining in with one last outing with the girls at the Olympics closing ceremony last year before hanging up her mic for good.

​It seems that she’s now using her girl power to dominate the fashion world instead, opening up a new pop up space in Selfridges London for her collection.

Clearly excited about the new collaboration, VB has been tweeting up a storm - including a bunch of hilarious snaps of the fashionista hanging out with mannequins.

One was captioned: "Found someone to dance with at theofficialselfridges, early morning merchandising my new pop up space!"

It's nice to see the former Spice Girl having fun while working!

Do you prefer Victoria Beckham as a fashion designer or a pop star? Tweet us @sofeminineUK

by the editorial team
+
All the news about Spice Girls