Victoria Beckham furious at Mel B for revealing their lesbian kiss

They were best friends and former bandmates, but it looks like Mel B won’t be getting a Christmas card this year from Victoria Beckham. Reportedly the fashion designer is furious after Mel B publicly revealed that they had a shared a steamy clinch during their time in the Spice Girls, which has caused the Beckham boys to be teased mercilessly at school. Poor little guys – we know how cruel school kids can be.

Mel B claims to have kissed all of her Spice Girls bandmates at one point or another, including straight-laced Victoria Beckham.

The outspoken singer-turned-TV-presenter made the admission during a candid chat with US radio DJ Howard Stern.

Victoria Beckham was reportedly livid at the confession, not because she’s embarrassed, but because her kids are now being bullied about it at school.

Brooklyn, 13, Romeo, 11, and eight-year-old Cruz have apparently been teased about it by their mates, and Posh thinks it’s completely reckless of Mel B to have divulged such things.

A friend of the 39-year-old fashion designer told Now magazine: “Vic is fuming about Mel B’s revelations. She was incredibly embarrassed after her boys were taunted by friends over their mum’s ‘lesbian kiss.’

“Victoria wants her to leave her out of any future interviews.”

The 38-year-old former X Factor judge not only admitted to passionate lip locks with Posh, Emma Bunton, Geri Halliwell and Mel C, but she also let slip about a previous lesbian affair.

When asked by Howard if she fancies any of her fellow Spice Girls, Mel B said: “Always, yes. They are my homies. I kissed all of them, yes.

“I wanted to try out my tongue piercing and so I kissed them all.”

The radio DJ asked if she’d had threesomes while in the group and Scary Spice coyly replied: “Back in the day, I had fun.”

There’s clearly no love lost between them and when questioned about the possibility of a Spice Girls reunion, Mel was pretty disparaging of the award-winning designer’s work.

She said: “Let’s put it this way, Emma has a radio show every morning, Mel C is on tour, Geri has Australia’s Got Talent…and then there’s Victoria.”

Yes Victoria who has won Designer of the Year at the British Fashion Awards and has made her clothing label into one of the leading high fashion brands in the world.

Mel B tried to play down the bad vibes towards Vic by adding: “We fight, we argue, we make up…it’s always been like that.”

But according to Now magazine, Mel B’s latest antics have just deepened the rift between her and Victoria.

The pair hasn’t always got on and on the opening night of the Spice Girls musical – Viva Forever! – the fashionista made sure to keep her distance from Mel, even turning up separately and posing with her family instead of her former bandmates.

This most definitely won’t have helped things. Eeek – maybe it's time to keep your mouth closed Mel?

Do you think Mel B shouldn’t have made those revelations? Tweet us @SofeminineUK. 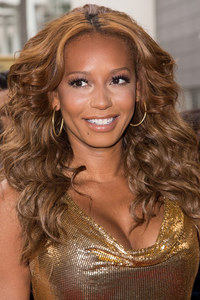 by the editorial team
+
All the news about Mel B