WATCH: Justin Bieber waves to fans as he is released from jail

Yesterday Justin Bieber was pulled out of his Lamborghini and charged with a DUI and drag racing, completing his fall from grace as the police reported that he had consumed alcohol, smoked marijuana and taken prescription drugs. However, despite the serious charges the Biebs still thought it acceptable to sit on the roof of his car and wave to his adoring fans as though he had just emerged from an awards ceremony – can anyone tell us what this boy is thinking?!

Yesterday Justin Bieber was arrested for DUI and drag racing in Miami, but that doesn’t mean he isn’t still dedicated to his fans, the ever-loyal Beliebers!

After having made the $2,500 bail, the Baby singer emerged from the police station ten hours after his arrest wearing sunglasses and a black hoody. Rather than duck into his black SUV like a normal disgraced star who is serious trouble, the 19-year-old perched onto the car and waved to his fans who had gathered to catch a glimpse of the felon.

Taking to Twitter, he wrote: “@justinbieber love you and I will act in the manner of someone who truly cares. That is all I have to say. Thanks for all those concerned.

“Been a long day. Bottom line is we are defined by how we handle adversity. Be there when it counts. Love fully in good times and bad.”

Justin and his fans also have the support of other A-listers, most notably Lady Gaga, as she took to her website to write a lengthy statement of support.

She wrote: “Hey monsters. I know everyone today is talking about Justin’s arrest and all sorts of words and judgments are happening on the Internet. Everyone is entitled to their own opinions, and to stand up for themselves, but I think we should be supportive of Beliebers.

“They deserve, just like any other fan, to feel strong for each other and Justin so they can continue to share the bond they have through music. We may not understand everything celebrities do because there’s only so much we see, but Justin and Beliebers we ‘born this way’ too.

“Let’s spread love and compassion to Beliebers today. That is what we are all about. Can you trend #MonstersSupportBeliebers?”

It looks like the Twittersphere is being considerably less forgiving though, as one user wrote: “Wow #FreeBieber trend is absolutely disgusting, shows how stupid people are. They’d rather have somebody get hurt than have him in jail.”
Another wrote: "#justinbieber he broke several laws and was driving dangerously but it's ok as he's such an inspiration to the utter moronic cattle.”

What’s your opinion of Bieber’s arrested? Tweet us @sofeminineUK 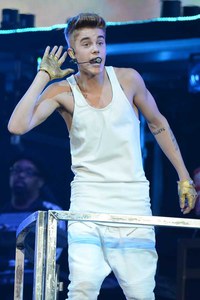