We all remember the days of High School Musical - much as we'd love to forget. Little did we know that the slightly irritating, squeaky clean, floppy-haired Zac Efron would blossom into - let's say it - such a hunk. He's also not a bad actor! So, check out the latest red-band trailer for his new film Neighbors, which also stars Seth Rogen and Rose Byrne.

The first look trailer for Neighbors has arrived and Zac Efron is looking hot.

The comedy movie follows the arrival of a Fraternity house into a nice suburban neighbourhood.

And, of course, hilarity ensues.

Rather fittingly, Zac Efron plays the king of his Frat house, while Seth Rogen takes on an unusual role involving responsibility - the new father next door.

The trailer shows plenty of amusing moments as the young family - Seth, his wife (played by Rose Byrne) and their baby - end up at war with their university neighbours.

The clip also features a few shirtless Zac moments around the pool and at the BBQ. Nice.

From the people who brought us This Is The End, there's bound to be all manner of lude, crude and just plain silly jokes.

As Zac's character defends their right to party, he warns: "Welcome to the darkness, b**ches."

He then goes on to plant airbags in Seth Rogan's office chair. We told you it's silly.

Speaking about This Is The End, Seth explained that his priority has always been making people laugh.

They even use test audiences to ensure only the best gags make it in.

He told Screen Rant: "Basically - people don’t laugh, we generally don’t use it.

"So as long as the people are laughing at it, then we’ll use it. If there is something that seems like it’s too inside or something like that or just a reference the people don’t get, then, you know, we don’t want to like impose things on people."

Directed by Nicholas Stoller and co-starring Dave Franco, Lisa Kudrow and Jake Johnson, Neighbors will open in the UK on 7th March 2014. 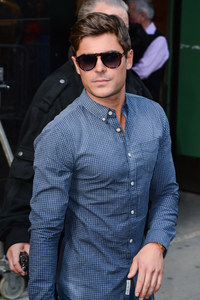