by the editorial team Published on 11 November 2015 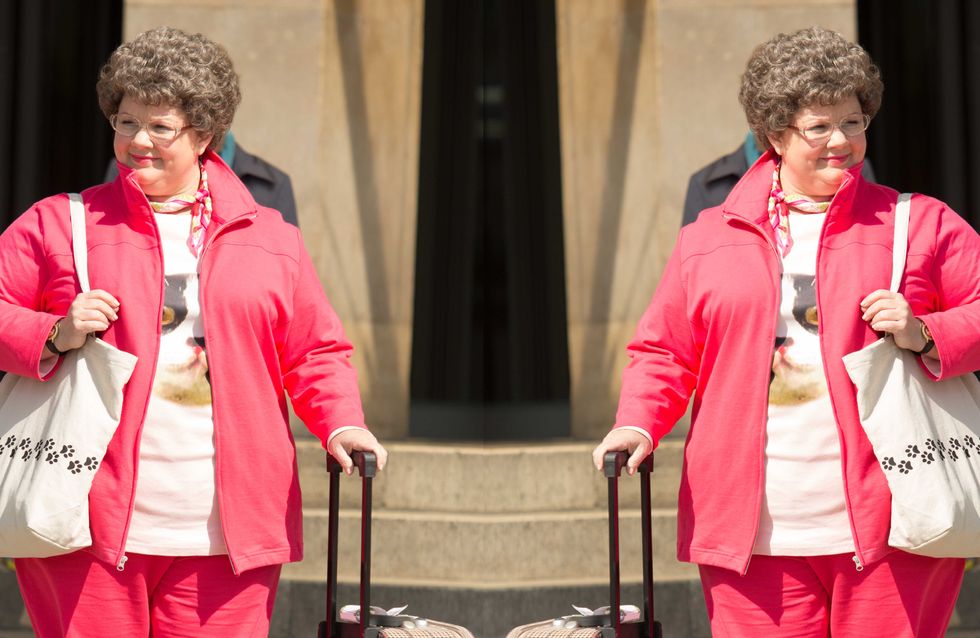 Everyone wants to know what they're going to look like when they grow old. So when we were offered the chance to see exactly what our older selves looked like to celebrate the release of Spy, we jumped at the chance. Unfortunately for me, mine was spot on: a crazy cat lady, chasing some pigeons.

When I first arrived at the small studio tucked away in the middle of the bustling Camden Lock Market, I was handed a bright pink velour tracksuit. I would hope that the older me would have better taste than this, but as soon as I slipped them on and stroked the smooth material, I instantly thought that old me could get used to this. Easy to move in, and easy to spot if I ever went out for a walk and got lost on my way home. Paired with this was a light pink t-shirt with a huge cat's face on it. I can't deny, old or not, this was right up my street​.

Next, I sat with the make up artist as he began to cover my face with special latex. I would pull my skin taut, and he would slather the latex onto my face. Next, he would work my skin in a kind of smooshing motion, the way adults do to the faces of babies. It felt strange, like a massage by an amateur, but it made sense: he was encouraging the latex on my skin into wrinkles. A couple of blasts with the hairdryer and my face was dry and wrinkled to perfection.

The paint was then applied on top of the latex. This accentuated the wrinkles and made me look super tired and kinda gross. My hair was plaited - which I found very soothing - and clipped close to my head to make way for the crazy birds nest that was once a perfect wig that was to be planted ​atop my noggin. Like Melissa McCarthy, I'm a sucker for a bad wig: the badder the better.

And then, I was old. Like, really old. But also kinda crazy. I looked like my mother if she'd been smoking 40 a day since birth. The finishing touches were added - a scarf that I worryingly rather liked - and then it was time to show off my look. I was nervous about heading out into the market, but strangely enough, no one even acknowledged my new look. I saw some rather eccentric-looking outfits whilst out in my new get-up, so I guess being flamboyantly dressed was just the norm in Camden.

In my new disguise, I felt I could do anything. It was kind of cathartic, actually. I was dressed like a crazy lady, so it gave me permission to act like one. It was freeing that no one knew who I was or what the hell I was doing. I sat at the edge of the river and fed the swans. And then the ducks. And then the damn seagulls, who were absolutely terrifying, the cocky bastards. It got a point where I was scared the seagulls were going to get too cocky and try and snatch my wig, so I knew it was time to get change back to current-day me.

What did I learn during my time as old me? Probably that I all-too-easily stoop to the position of crazy old lady rather than respectable grandma. But it sure was fun looking into the future.​

Spy is out to own on DVD and Blu-Ray now.

Are you a crazy cat lady waiting to happen? We hear ya! Tweet us at @sofeminineUK

​​​FriendsFest: The One Where Gunther Makes All Your Dreams Come True​