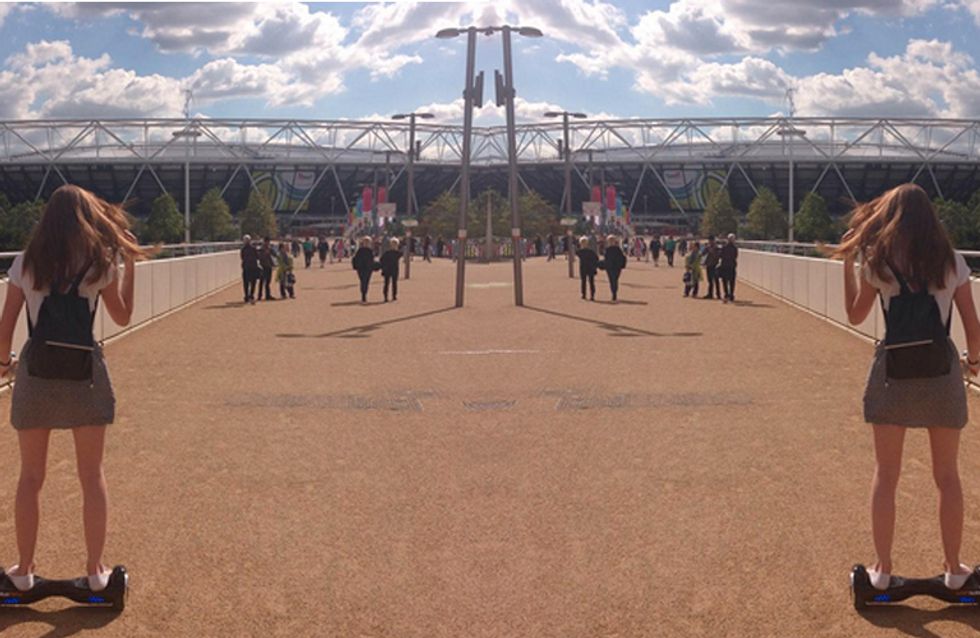 When the Sofeminine office was invited to try out the newest fad to avoid walking, the Smart Glider, we knew we were in for a fun, potentially spinal damaging time.

These new, relatively affordable Smart Gliders have been hitting the headlines for a variety of reasons lately, and not all of them good. Wiz Khalifa was arrested at an airport when he refused to dismount his mighty steed, claiming he wouldn’t back away from living in the future (word), and a teenager in London was the first to suffer a Smart Glider theft after muggers jumped out of a car and punched him in the face for it. They probably weren’t thinking about what would happen when they didn’t have the charger. They just wanted a few hours of glide time.

And who could blame them?! (Just kidding, they need to be arrested). Smart Gliders are cool. When I was invited to try one out for SoFeminine, I had ripped it from the PR’s hands, jumped on it and fallen backwards all in under 10 seconds, because I immediately saw what the fuss was about. Smart Gliders weren’t just glorified skateboards, nor were they a fully-fledged segways. They are the future!

Taking it up to the SoFem office, the Smart Glider was quickly jumped upon - literally - as we took it in turns rolling our new toy up and down the hallway. Not only was this delightful, especially when our Managing Director had a go and discovered she was a pro, it also became the catalyst for a now on-going tense gang war between the SoFem office and the office opposite that's akin to West Side Story’s Sharks and Jets as we whooped, cheered and zoomed along our shared space.

This is how it works if ya’ll wanted to know: you balance your weight equally on the board and control the glider by applying pressure to the relevant foot in order to move forwards/backwards/left/right or just stand still (which is no easy feat). Turns out A LOT of people in our office weren’t in touch with their central core and found this somewhat challenging:

She was there for ages, subtly trying in vain to turn it out while pretending to look through our office window.

I was also dragged down by those who I can only assume wanted to cause my harm after I’d shouted ‘BALANCE YOUR CORE’ for the two-hundredth time.

But once we took our new toy outside, and had a solid half-an-hour playing on it, something changed. We were one with the glider. Much like Harry Potter’s Firebolt, it seemed to react to our minds rather than our movements. It knew us.

On taking the smart glider back to my sad London Zone Three home, I realised something crucial: don’t carry a Smart Glider anywhere. You will die. Although it is great to glide on, carrying it is horrendous. Five people asked me if I needed help. I developed a twitch in my cheek from the strain. If you’re going to get a Smart Glider, don’t make the same mistakes as me and carry it. Gliders gotta glide.

While my housemates took it out for a spin, I did some research on the glider that had quickly become my favourite new pastime. Coming in five different colours (they have pink if you want to be AWESOME), the Smart Glider is tipped to be this year’s big Christmas gift, and can go up to 10mph with a 132W motor. You can go over 9 miles on just one charge, and charging it to the max takes between 1-2 hours. Basically – if you want to commute on this, you can commute. If you want to hang out with it in the park all day, pleasantly answering any queries that admiring passers-by may have (like I did all weekend), you can. This is a toy that children and adults alike will LOVE.

But what will happen when all the businessmen of London turn from their annoying little scooters and rollerblades to the Smart Glider instead? What will happen when they stop being a novelty, and crowds travel to work via glider? Will we have pedestrian-glider crashes? Will we have to create extra smooth pavements separate from pedestrian pavements so users can roll with reckless abandon? Is this the first step to becoming the humans from Wall-E?! Who can tell. All I know was that once I got the hang of it, it was the best. Whilst so easy to use, on it you look and feel like a total skateboarding pro, and I know my friends who gave it a go felt the same way. Although I missed filming my motorbike-driving, football-crazed friend twirling on it while singing Phantom of the Opera’s ‘Masquerade’, be assured, it happened. It is a full of possibilities.

Smart Gliders are now available via FutureWheels, will you be getting one for Christmas? Tweet us what you think @sofeminineUK!

Walking down the aisle
by the editorial team