by Emmy Griffiths Published on 9 September 2015 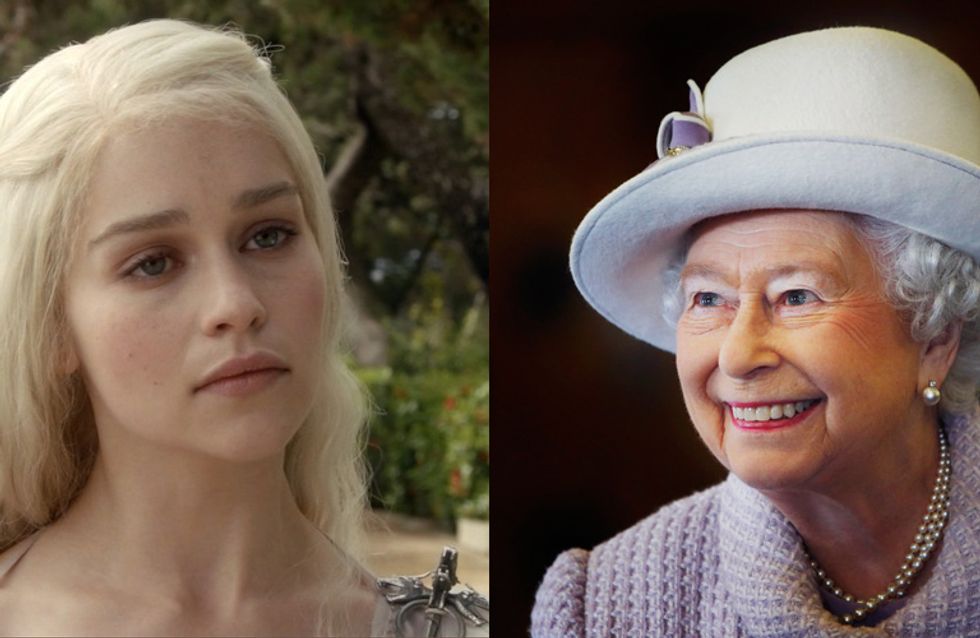 You’d think that Queen Elizabeth II, much beloved Queen of the Commonwealth realms, supreme Governor of the Church of England and Defender of the Faith and longest EVER reigning Monarch would be triumphant in this comparison, being that she is a real person and everything, but Daenerys Targaryen is so amazing that we forgive that fact that she doesn’t actually exist. She’s real to us! But which Queen will reign supreme in our chosen categories…

This is a tricky one. Liz’s full title is: Queen Elizabeth Alexandra Mary, constitutional monarch of the Commonwealth realms, supreme Governor of the Church of England and Defender of the Faith.

Impressive, no? On the other hand, you have Dany’s title:

Daenerys Stormborn of the House Targaryen, the First of Her Name, the Unburnt, Queen of Meereen, Queen of the Andals and the Rhoynar and the First Men, Khaleesi of the Great Grass Sea, Breaker of Chains, and Mother of Dragons.

As impressive as Liz's titles are, Mother of Corgis just doesn't have the same ring to it as Mother of Dragons.

Queen Elizabeth gave us Charles, Anne, Andrew and Edward. Charles then gave us William and Harry, for which we will be forever grateful. Kudos your Royal Highness, those are some top children!

Daenerys had one disastrous pregnancy which ended up with her unborn child being cursed by a witch. Unpleasant. Following that, she climbs into a pyre and her three dragon eggs hatch so she becomes the mother of dragons.

So who wins? Are we more impressed by dragons, or by Prince Harry? Oh it's Harry isn't it. Has to be.

Queen Elizabeth is notoriously sassy. Not only does she double dabble with pastel two sets, she never needs to prove she’s happy (like at Christmas), nor does she bother to accept flowers that do not interest her, and yet, the world loves her for it. This is the Queen who kept James Bond waiting and jumped out of a helicopter to launch the 2012 Olympics…

Daenerys pretended she couldn’t speak Valyrian until a shady deal had been struck, then she turned on the guy who had spent the three episodes calling her all sorts of foul things thinking she couldn’t understand by burning him alive. So. Much. Sass.

Queen Elizabeth met her third cousin Prince Philip, fell in love, and the two began to exchange letters. By 1947 the pair were married and they have been together ever since, through thick and thin. You can’t compete with that, you just can’t!


Daenerys, on the other hand, was forced into marriage with a barbaric brute by her brother, was bonked every night in a most unsavoury fashion, was forced to eat a raw horse heart and eventually smothered her brain dead hubby with a pillow (even though she was totally in love with him by that point and it was heartbreaking to watch).

Winner: We have to say, we reckon Queen Elizabeth wins this round. Much more stable.

The Targaryen dynasty is one that lasted for nearly 300 years before Robert Baratheon killed off most of the family, leaving Dany to be born in exile with no one but her brother Viserys for family. She then willingly watches him die when her husband pours molten gold over his head. Swell family values there!

Queen Elizabeth became Queen after her father, King George VI (the guy that The King’s Speech is based on) died. King George took the job after his brother, Edward, decided he preferred to marry his twice-divorced American girlfriend Wallace Simpson than become King. Meh.

Daenerys might impress us all with her casual takedowns of anyone who gets in her way, but we definitely don't think we'd have much fun if we had a cheese and wine evening together. She is far too regal, is she even capable of having a casual conversation about the weather anymore? We think not.

Queen Elizabeth agreed to act with James Bond in an attempt to make the British public happy at the Olympics. She put on the performance of a lifetime! Give her an Oscar for her efforts already!

No offence Dany love, but you have no idea what you're doing with that dragon. Now you're out in the middle of nowhere surrounded by a Dothraki hoard and your dragon is out of petrol. Daenerys might be the worst driver in Westeros.

Queen Elizabeth, on the other hand, drives her range rover about like a f***ing BOSS.

Winner: Queen Elizabeth. She did have to take her driving test, right?!

Looking at the inescapable evidence, it looks like Queen Elizabeth makes a better Queen. Sorry Westeros. Or do you think Queen Daenerys should be crowned triumphant? Tweet us @sofeminineUK

This Toddler Singing Along To Les Miserables Is Freaking Adorable