Why Ariel From The Little Mermaid Is The Absolute Worst

by Emmy Griffiths Published on 16 November 2015 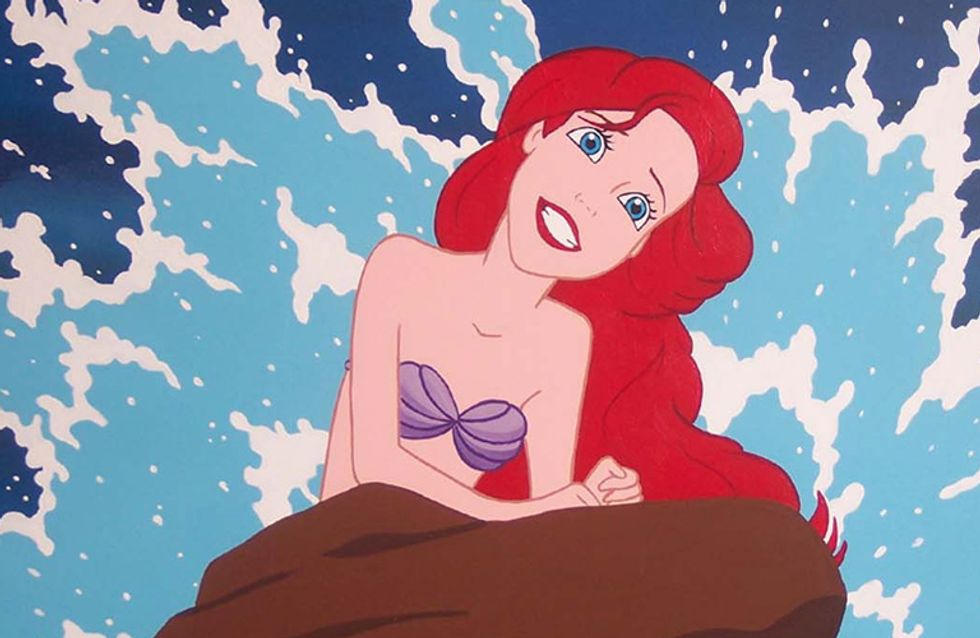 The Little Mermaid has been my favourite Disney film since I was two. I have a video of my Mum and I singing Poor Unfortunate Souls after having just received a A Little Mermaid lunchbox for my birthday. I had an Ariel Barbie. On re-watching the film, I welled up when you first see mermaids like three minutes into the film. That being said, watching the film as an adult has led me to make some entirely reasonable judgments on Ariel. Both as a mermaid and a human, that girl is the WORST.

She is the daughter of the much loved and respected Triton. The Merpeople LOVE that man, so he's probably a pretty liberal King of the Sea. And you know what? All he wanted as thanks for his presumed Millenia of ruling the ocean was to have just one day of chillaxing and watching a concert featuring his daughters. He even tells Sebastian how much he’s looking forward to it. And what does his youngest daughter Ariel do?

SHE FORGETS. She lets her sisters down, her dad down and most of all herself down. Isn’t it meant to be the staple of a Disney Princess that if you have sweet, kind parents, you HAVE to be nice to them? Belle, Rapunzel and Mulan are nice to their parents.

So the one night a year her Dad might actually have the chance to enjoy himself, Ariel and her friend Flounder go to a spooky shipwreck to search for human artifacts. Which brings me to point number TWO.

Flounder is a CHILD. While Ariel is all 16, flirty and thriving, Flounder has all the makings of a sweet, nerdy fish. If he was at Hogwarts, he’d be a Hufflepuff. He doesn’t want this danger in his life. Ariel is taking advantage of Flounder as a hotter older part-lady-part-fish.

Why else would he be traipsing after her in spooky shipwrecks? Not only that, but she COMPLETELY rips into him for it even though he's only doing it because he must fancy her. Seriously look at his little fishy face!

Then she puts Flounder at risk because oh, A SHARK ATTACKS THEM, and calls Flounder a guppy for understandably freaking out.

Then when she FINALLY decides to give a f*ck about her poor Dad and his feelings, she decides to go home and grace him with her lofty presence only to kick off when he says he knows more about humans than she does and they are barbaric.

Just think about her father, an immortal God of the ocean, and all the horrors he must have witnessed at the hands of humans?! Even I know a few people that would have no qualms if their tuna wasn’t 100% mermaid safe. Also, have you never seen Splash?! Pirates of the Caribbean 4? We’re fascinated by this shit! OF COURSE WE’D KIDNAP YOU ARIEL.

I’m not saying she isn’t allowed a bit of teen rebellion, so fine. Let her have her treasure trove of human artefacts. But then she sees Eric and any common sense she might have had GOES OUT THE F*CKING WINDOW.

This is some Edward Cullen shit right here.

She really couldn’t care less about that mermaid secrecy act could she? She is literally belting out a musical smash hit on a rock while facing the beach. They haven’t even left yet! Could you admit wait another 30 seconds?!

Then she’s all “morning Daddy’ and singing with NO REGARD TO HER FAMILY WHATSOEVER. Doesn't she feel guilty that she's literally 100% gone behind her Dad's back? What makes this even sadder is that Triton is all "I wonder who the lucky Merman is." See? He doesn't mind Ariel dating! He just knows humans are baddies who have probably eaten many of Triton's fish friends!

Not to mention, Ariel is now obsessed with a guy she's met once! As Game of Thrones Sansa will tell you, just because they're a Prince and have nice hair, it doesn't mean you should love them on sight.

Then she swims off during THIS, showing she is totally ignorant of true genius.

Then Triton finds out that she saved a human and took his rubbish statue for her stalker cave and Triton is justly DONE with her, especially when she shouts "Daddy I love him!" Seriously Ariel, read the room. You could have kept that piece of info to yourself, ESPECIALLY seeing as you had never actually spoken to the man before.

Oh for Gods sake Ariel get a grip.

Then she just signs away her voice to a sea witch like 'yeah this isn't at all suspicious', bearing in mind Ursula told her that she would LITERALLY turn into pond scum if she didn't force Eric to kiss her in three days. Ariel is so full of herself she thinks she can win Eric over with just her face and body language.

Stop it Ariel, this is awkward for everyone including yourself. Except Flounder, who obviously is loving it.

So she lets Eric guess who she is and her name blah blah blah when WE ALREADY KNOW SHE CAN WRITE?! Why doesn't she just write for him to kiss her? Explain the whole thing?!

So she's having a lovely time with Eric without a second thought to her dad or sisters, who are surely freaking out. Like, fair enough if you want to adolescently punish your Father, but what have your sisters done to deserve never knowing what happened to their younger sister? She's having Sebastian lie to his boss about where she is, she puts the whole ocean at risk by even signing the contract with Ursula in the first place since she would have known she would have been a hostage should she fail.

Basically, she puts the entire ruling of the ocean at risk for a man she has never even spoken to before. That is a whole other level of selfish Ariel.

And what does she get for lying, sneaking, betraying her family, abandoning her friends and also breaking a contract that she really should have read before she signed? OH JUST A SPARKLY DRESS AND A LIFETIME OF COMMITMENT FROM A DASHING PRINCE. That's cool.

What Disney Princesses Would Look Like With Normal Waists

What Disney Princesses Would Look Like In Real Life