Why Benedict Cumberbatch struggles to chat up women

Now, don't shoot the messenger - Benedict Cumberbatch is adamant that he is far less attractive than most other successful actors and is now grateful for this as it has given him freedom in choosing roles. Apparently it means he's pretty shy in social situations too.

Benedict Cumberbatch has admitted he believes he's not as attractive as his fellow Hollywood actors and he's just fine with it.

Comparing himself to the likes of James McAvoy, Ben said that it has hindered him in getting certain roles.

However, it has also allowed him a lot of "freedom" in terms of landing jobs in which he can look as terrible as necessary.

He told TV Magazine: "I'm aware of the power of looks.

"I have wanted to play roles that have gone to much better-looking people than me and you think: 'Oh well, that's the pin-up guy's part...' for an actor like my friend James McAvoy, who's gorgeous on screen."

Well we can't argue with you there Ben, James is a bit of a hottie.

He continued: "At least I don't have to worry about taking precious care of my face because it's my commodity.

"That's a great freedom. I'm not afraid of being heinous for the sake of a part."

The 36-year-old explained that his ugly duckling opinion of himself makes him a little shy in public.

Add to that the inevitable confusion people have between him and his characters and he's not the first guy to chat someone up on a night out.

He explained: "I'm not that confident in social situations - just going up to someone in a bar and saying hi is even more difficult for me because they won't know the real me...

"They will just know me as a fictional person I play on the screen."

We can see why he may be concerned that people will think of him as a real life Sherlock but there's no doubt he's got a legion of fans who would disagree with the idea that he doesn't have the looks!

What do you think – Is Ben being too modest? Tweet us @sofeminineUK 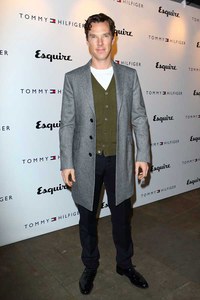