Iron Man, Thor, Captain America, The Avengers and their sequels may be funny, witty and have stunning starring leads (hey Chris Hemsworth) not to mention the billions they grossed at the Box Office, but we're just going to come out and say it - Marvel's newest movie Guardians of the Galaxy knocks all of our Marvel favourites out of the water! Here's what we loved about the bizarre sci-fi flick...

The main characters are 'a-holes'

It’s unlike other Marvel films being that it’s set in a strange universe where there are bright pink people by the dozen, talking trees are no big deal, and the main characters are criminals who are completely out for themselves and are constantly described as ‘a bunch of a-holes’.

Captain America would have a fit.

From the deeply serious Footloose references to the fact that no one’s ever heard of Chris Pratt's character Star Lord despite his belief that he is an infamous outlaw, the jokes just keep coming.

The story will hit you right in the feels

If the opening scene aims to tear your heart out and stomp on it, it'll definitely succeed.

Drax doesn’t get metaphors. Trust us. Here’s a taster!

You will love Groot unconditionally

Vin Diesel’s character is a giant tree-man that can only say ‘I am Groot’, and you will love him like a mother would her child. He is a sweetheart and basically the Hodor of GotG.

A disgruntled racoon named Rocket is a main character

Voiced by Bradley Cooper, Rocket is a genius with a penchant for massive guns, inappropriate pranks and sarcasm.

You will LOVE him.

It ties into the Marvel universe

Yep, it might be in a different universe but it’s still connected. It looks like Marvel is already looking at the bigger picture for future movies! Avengers meets Guardians of the Galaxy? Yes please and thank you.

You will buy the soundtrack when you get home

A child gets kidnapped from Earth and grows up in a strange universe with nothing but his eighties hits ‘Awesome Mix’ tape to keep him company. Of course the soundtrack is fantastic. Here’s a taster.

The female characters are bad asses

There are no damsels in distress here. All the women are as ruthless, strong and kick-ass as the men, and we couldn’t love it more! Speaking of which…

If you’re a Doctor Who fan, we’re going to hazard a guess that you won’t be missing out on this sci-fi paradise, but trust us, Amy Pond is GONE. Karen Gillan is totally unrecognisable as the psychotic Nebula.

Chris Pratt is EVERYTHING

You don’t need to hear us fangirling the hell out of Chris Pratt, especially since this speaks for itself…

HIS ABS. LOOK AT HIS ABS.

Forget all of those dark and moody superhero movies – this one hurts your eyes it's so bright and colourful! Probably so we can better see the pink people in all their glory!

There’s already going to be a sequel!

The cast and crew already announced the GotG sequel at the San Diego Comic Con! It’ll be out in 2017, so what are we supposed to do in the meantime? Oh, probably go watch the first one, which will be out in cinemas 31st July!

Are you going to be queuing up at midnight to watch? Tweet us @sofeminineUK! 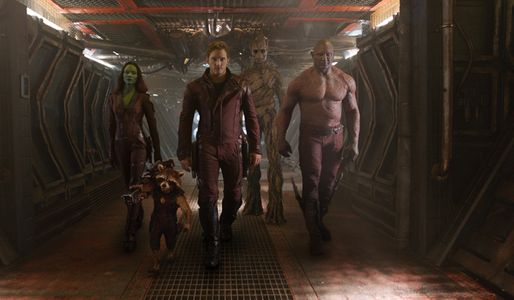 Enjoyed this article? Try these out!