Home / Entertainment / News celebrities / Why Is This UK Man Being Led Around On A Lead?

Why Is This UK Man Being Led Around On A Lead?

by Stephanie Ashley Published on 11 April 2014 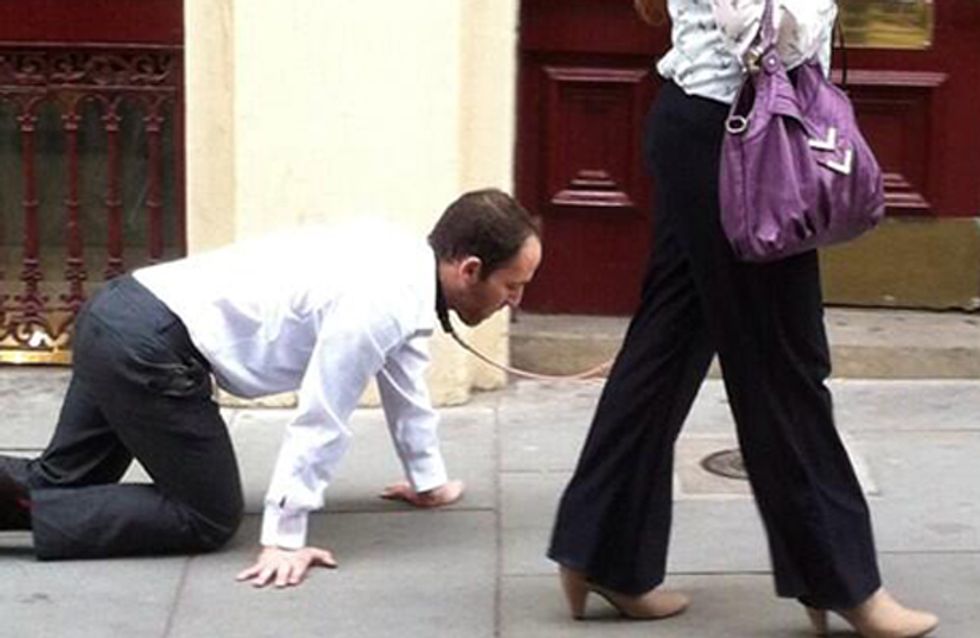 A woman walking around, holding her latte and a dog lead in London is no big deal, right? What if there's a businessman on the other end of that lead, though.

Earlier today, a woman in black slacks walked along, sipping her coffee, as she led a well-dressed man around by a doggy lead. (You think he'll ruin that nice outfit down on all fours?)

Twitter has exploded with people taking pictures of the strange sight, and everyone's been wondering: why on Earth is this man walking around on all fours like an animal? We've got a few ideas!

Maybe he lost a bet.

Spotted: A woman walking a man on a leash. #lostbet ? pic.twitter.com/CBWNBEqVs2

Maybe he's an honest man who got the short end of the stick and had the guts to hold up his end of the bargain!

They're auditioning for Fifty Shades of Grey.

Sorry guys, those kinky roles have already been cast. Nice try though!

Taken by @ChantalApple, the #manonleash in Farringdon this morning... I won't judge their lifestyle choices ;) pic.twitter.com/dqL31s4kXc

Hey, people get their kicks in many different ways, so perhaps this is just their version of foreplay?

It's just another viral stunt.

You know you've lived in London too long when your only reaction to a man being led along on a leash is to roll your eyes and ignore it.

Just like this tweeter, we've become too desensitised to crazy stunts. Though this one certainly tops our list of recent things that turned our heads!

He's been hypnotised by a magician.

Did we really just see this outside work? A woman walking a man like a dog on a lead in #Farringdon #London #bizarre pic.twitter.com/GS3TKJYAeR

Remember that scene from Now You See Me when Woody Harrelson has a husband admit to cheating on his wife? You never know.

It's a PR campaign for Agent Provocateur.

Just a regular day in Farringdon. Nice to see some men know their rightful place! pic.twitter.com/I3TQVfal9S

People say they first saw the couple around the area of an Agent Provocateur store. Maybe they stopped by for some sexy gadgets and decided to try this one out in public?

He is absolutely terrified of that woman.

Taking a moment to imagine uproar if man had been walking woman through Farringdon on a dog leash.

To be honest, we have to agree with this lady that it would be a TOTALLY different scenario if it was a woman on her knees. Sexual equality?

It was a campaign for Universal Jobmatch.

So, #manonleash was an advertising campaign for Universal Jobmatch. pic.twitter.com/JQX6Cza6zr

This graphic supporting Universal Jobmatch has popped up in the Twittersphere, but we're not so sure this act was specifically a PR stunt for them (though well done if it was!) Perhaps, like Duane Reade, they were simply taking advantage of a high-profile moment?

What's your guess as to why this businessman is being led around the urban streets on a lead? Tweet us @sofeminineUK!