by Emmy Griffiths Published on 13 August 2015 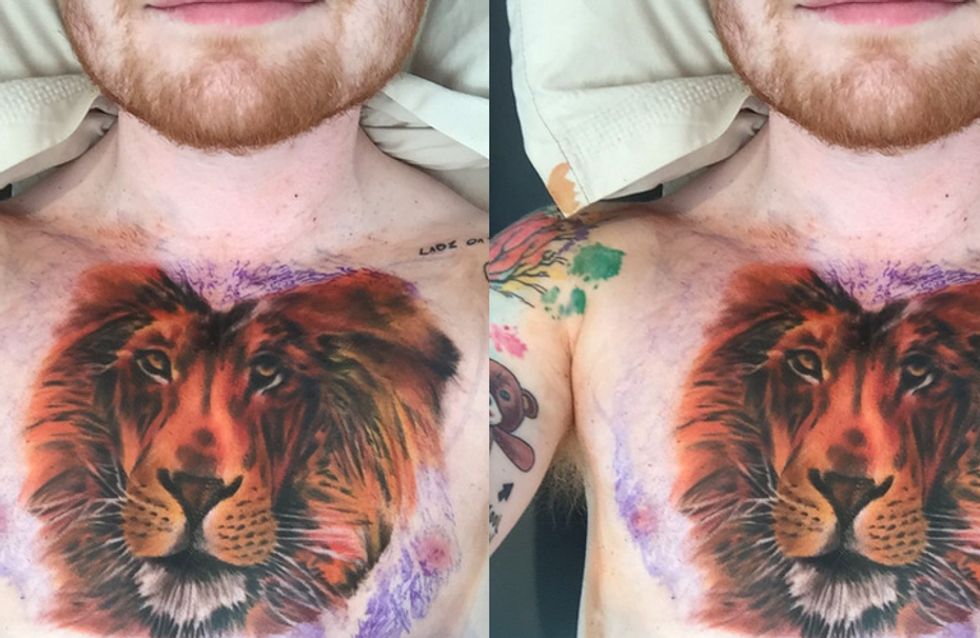 Ed Sheeran is a freaking angel and we'll physically FIGHT anyone who says otherwise. That being said, this doesn't mean that all of his decisions are necessarily great ones. Ed recently debuted his newest tattoo of a giant chest lion, and honestly we're not sure how we feel about it. It's just so BIG!

According to BBC, Ed wanted to commemorate his amazing sold out Wembley stadium gigs with one massive tattoo. He said: "Originally I was going to get the floor plan tattooed on my side, but that seemed a bit ridiculous." So you got a GINORMOUS lion tattoo instead? EDWARD!

Ed posted a snap on Instagram halfway through the tattoo (which will all in all take 12 hours to complete) with the caption: "Halfway and ouch".

The tattoo artist working on Ed, Kevin Paul, said: "The piece as it stands took about 6 hours to do but there is still about 6 hours left to complete the tattoo...Through the last hour on this piece you could see the pain started to get to him. The chest is a painful place to get inked."

Yeah whatever Kevin. Thanks for causing our boy pain/painting a giant unremovable lion on his chest.

To be fair, Ed Sheeran doesn't shy away from getting crazy tattoos, so we shouldn't be surprised, but it looks like we're on the only ones that are alarmed by the lion as fans took to Twitter to express their, erm, distate for the singer's new ink:

@edsheeran what would Granny Sheeran say after seeing that huge tattoo? 😂

Ed Sheeran's new tattoo looks like one of them paint by numbers you'd find in a zoo gift shop pic.twitter.com/RQtt8lmBlA

I was not emotionally prepared to wake up this morning and see a new picture of Ed Sheeran's chest tattoo.

Ed even chimed in with his own opinions about the tat backlash, tweeting:

All this kerfuffle over a tattoo. If it was black and white saying a clever phrase in a language I can't speak no one would've said anything

It's not the first weird tattoo I've got and it won't be the last, but I like all of them. I'm also eating a bowl of pasta now so byeziez x